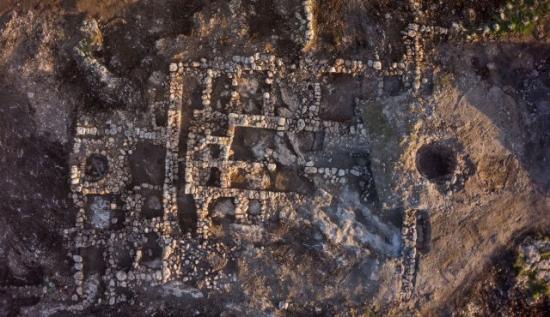 The 23-room farmhouse found near Rosh Ha'Ayin, showing the Ottoman kiln (round circle) on the right.Photo by Skyview, courtesy of the Israel Antiquities Authority

A large farmhouse - dating back some 2,800 years - has been discovered in central Israel, the Israel Antiquities Authority announced Monday. The structure, located in Rosh Ha'ayin, apparently dates back to the period of the Assyrian conquest in the 8th century B.C.E.

It's early days to say exactly who lived in the huge house, which had 23 rooms. It can be said that the house had been in use for roughly 600 years, from the Iron Age II through to the Hellenistic empire. But a farmhouse of the time would have been more like a settlement than some Big House on the Prarie, possibly housing a farming clan, according to the archaeologists.

The farmhouse was occupied by farmers for some 600 years, based on ceramics and other indications, from the time of the Assyrian conquest through the Persian period in the 6th century B.C.E., and into the Hellenistic period, which began with the conquest of the region (and Persia) by Alexander the Great.

However, after that time, the edifice – which measured some 30 meters by 40 - was abandoned and lay empty for well over a thousand years – until its stones were repurposed by the conquerors of the Ottoman empire, for a lime kiln, archaeologist Amit Shadman, director of the excavation on behalf of the Israel Antiquities Authority told Haaretz.

Indications that the building housed a farming community include not only the ceramics, such as large vessels from the Persian era and other pieces from the residents' day to day life - but also the surroundings. Rather than being situated on a hill on which a fort could have squatted, watching and controlling the environment, this was built on agriculture land.

"The area had a silo to store grains, and barns," Shadman says. "We also see agriculture terraces. All these things together lead us to the conclusion that this was a farmhouse."

The archaeologists also discovered numerous wine presses in the vicinity of the settlement, indicating the wine industry was the most important branch of agriculture in the region.

One of the most exciting finds on the floor of one of the rooms – which being from about 325 B.C.E. also helped to date the site, says Shadman – was a rare silver Greek coin, bearing the military leader’s name – ΑΛΕΞΑNΔΡΟΥ, around the image of the god Zeus. The flip side of the coin shows Heracles. 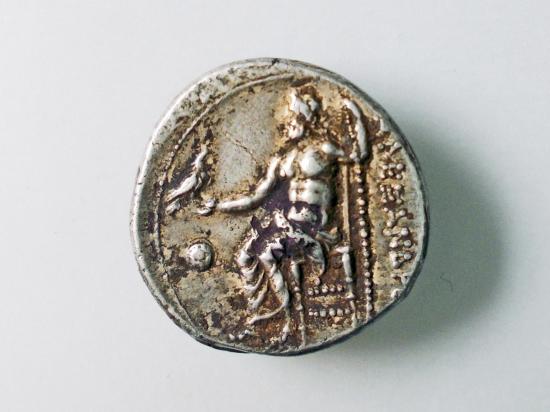 Greek coin from 325 B.C.E. with image of Zeus, and the inscription bearing the name of Alexander. Photo by: Robert Kool, courtesy of the Israel Antiquities Authority.

Ultimately, the farmhouse with the abandoned coin on its floor had stood empty for centuries on end – but at least it stood. With the Ottoman conquest of the region came an appetite for lime and, to use the stone, they destroyed the building, says Shadman. Yet what does remain is in an excellent state of preservation, says the Israel Antiquities Authority, which – together with the Construction Ministry – has decided to conserve the site as is, for visitors 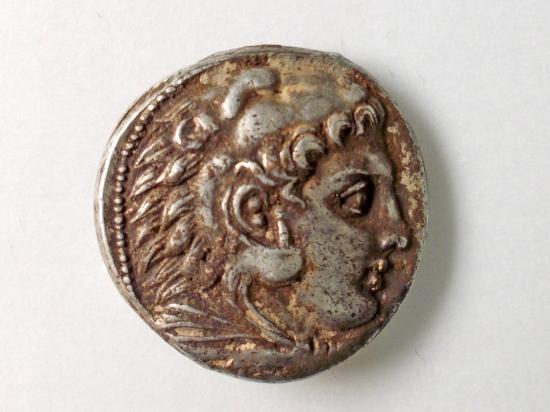 The face of Heracles on the reverse of the coin. Photographic credit: Robert Kool, courtesy of the Israel Antiquities Authority.