Rome's military women have been hiding in plain sight

Talk about hiding in plain sight. Women are thought to have had no official role in Roman army activities. But now a monument that's been sitting in the centre of Rome for almost 2000 years is adding to the evidence that soldiers ignored a ban on marriage, and that the wives or daughters of commanders might have taken part in triumphal ceremonies. 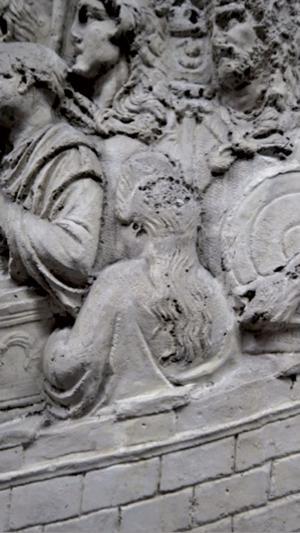 Archaeologist Elizabeth Greene told the 8-11 January annual meeting of theArchaeological Institute of America in New Orleans about six females depicted on the iconic Trajan's column in Rome, Italy, a triumphal monument to a military victory.

The figures on the column are attendants holding sacrificial offerings at a military religious ceremony, a role usually carried out by boys. But six of them are clearly recognisable as women or girls, says Greene, of the University of Western Ontario in London, Canada. She thinks the six females may have been wives or daughters of senior officers.

Scholars have studied the column since the 18th century, so how has no one noticed these women before? For starters, it's more than 30 metres tall, so much of it is hard to examine close up. Plus, you see what you look for, says Lindsay Allason-Jones of the University of Newcastle, UK: "Trajan's column tends to be studied by military historians, looking for details of how things were built and machinery."

Only men could join the Roman army, and during his reign from 27 BC to AD 14, the emperor Augustus forbade rank and file soldiers from marrying, a ban that lasted nearly two centuries. Classical texts on the Roman army have little to say about women. So, for many years, most archaeologists believed no women were attached to the army, says Allason-Jones.

This started to change in the late 1980s, when Allason-Jones started finding evidence that the wives and children of centurions – officers who commanded units of 80 soldiers – lived with them at border and provincial forts.

And in the early 1990s, Allason-Jones and Carol van Driel-Murray of the University of Leiden in the Netherlands found shoes in women's and children's sizes at Vindolanda, the site of a Roman fort along Hadrian's wall in northern England. They also found bronze plaques called diplomas, which were given to provincial soldiers who earned Roman citizenship by 25 years of service, that mention their wives and children.

Now, Greene has reassessed that evidence. She says about 40 per cent of the thousands of shoes found at the site clearly belonged to women or children rather than men. And of some 1000 diplomas catalogued, 43 per cent mention a wife, children or both. At Vindolanda, Greene says, the non-legal, de facto wife of a foot soldier probably lived outside the fort with their children, and had to work because the average soldier wasn't paid enough to support a family. Van Driel-Murray thinks some women may have worked within the fort as cooks, seamstresses or washerwomen.

Penelope Allison of the University of Leicester, UK, says that shoes and brooches from a site in Germany from the same period indicate that women there may have lived inside forts. "They just lived in the barracks with everybody else," she says, "engaging with the military community."

But it might be some time until everyone believes this happened. "I'm still trying to convince the older generation, mostly classical scholars and historians, who have problems with these forts being mixed communities," says van Driel-Murray. Whether the women Greene found on Trajan's column will tip the scales remains to be seen.