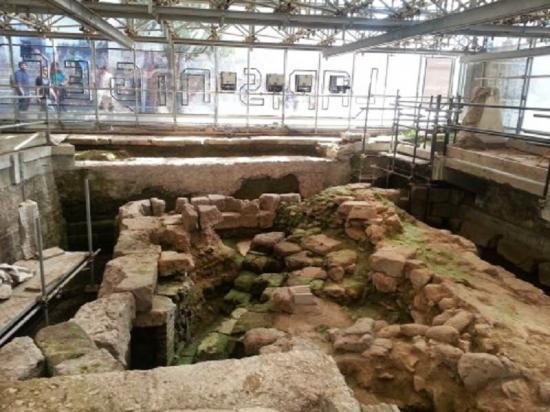 The Lapis Niger (Latin, "Black Stone") is an ancient shrine in the Roman Forum. Together with the associated sanctuary to Vulcan, it constitutes the only surviving remnants of the old Comitium, an early assembly area that preceded the Forum and is thought to derive from an archaic cult site of the 7th or 8th century BC [Credit: Il Messagero]

According to Italian newspaper Il Messagero, the wall was made from blocks of volcanic tuff, the product of volcanic eruptions, and was designed to channel water from the small river Spino, a tributary of The Tiber. Near the remains of the wall, the archaeologists also found fragments of ceramic pottery and the remains of food in the form of grains. "The examination of the ceramic material was crucial, allowing us today to fix the wall chronologically between the 9th century and the beginning of the 8th century," said Patricia Fortini, an archaeologist working for Sovraintendenza ai Beni Culturali di Roma Capitale, a state-funded organisation in charge of all historical, archaeological and artistic monuments found in Rome. Fortini is in charge of the Roman Forum, and she and her team have been excavating Lapis Niger, which means "Black Stone" in Latin for five years. In order to prove her theory that Rome is older than thought, Fortini had to re-examine all the archaeological research that exists about the location of the Roman Forum. "The first task was to review all available documents, mostly unpublished, left by Giacomo Boni, who led the excavation of the Roman Forum between 1899 and 1901, and by Maria Floriani Squarciapino who resumed investigations at the site in the 1950s," she said. "By correlating all the information contained in the archive documents, it was possible to recognise for the first time the exact location of the excavations conducted by Boni." Giacomo Boni, who discovered Lapis Niger, as well as numerous other monuments, left behind a wealth of drawings and aerial photographs of the location taken from a hot air balloon. Using 3D technology teamed with high-definition photography, the archaeologists converted Boni's documents into 3D models to help them with their search. Fortini says that team has learned much about the geological history of the Roman Forum – the wall was resting on sediments and silt dating back 700,000 years, which all points to water being channelled into the ancient shrine. Rome is believed to have been founded by the brothers Romulus and Remus on 21 April, and will celebrate its 2,767th birthday next week.