Nero left behind a legacy of bloody terror, but he had a stunning palace, which tourists can now view virtually. 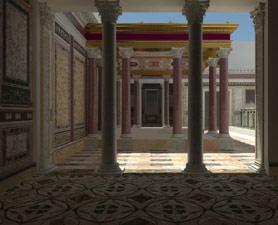 Notorious for being a cruel megalomaniac tyrant who persecuted early Christians, had his stepbrother, two of his wives and even his own mother murdered, Rome's fifth emperor, Nero, has never been held dear in Roman history.

In fact, he has been accused of nearly destroying Rome, itself, by allegedly setting the Great Fire in 64 A.D. that devastated the city.

The remains of the magnificent estate on the Palatine hill where the emperor lived in the first years of his reign, will open to the public at the end of the summer, Italian authorities announced at the opening of a major exhibition on the controversial emperor.

Stretching for about 1.2 miles along key archaeological sites of ancient Rome, the exhibition, which runs until Sept. 18, aims to show the many faces of Nero Claudius Caesar Augustus Germanicus (37 - 68 A.D. ).

Nero became emperor at just age 17 in 54 A.D. After his people took up arms against him, Nero fled Rome and stabbed himself in the throat before he could be arrested. He was 31.

"Written record is heavily against Nero and often describes him as a sadistic killer who played his lyre while Rome burnt," Rossella Rea, director of the Colosseum and one of the exhibition's curators, told Discovery News. "In reality, we believe that he wasn't responsible for the fire. Indeed, his lavishly built house was one of the first buildings to be torched," Rea said.

The palace, named Domus Transitoria, was an architectural masterpiece which stretched from the Palatine, where Nero first lived with his grand-uncle and adoptive father Claudius and his mother Agrippina, to the gardens of Maecenas on the Esquiline.

The residence was grandiose, but it did not last long. Built around 60 A.D., it was ruined in the Great Fire four years later and was replaced by the Domus Aurea, one of the most opulent palatial complexes ever constructed.

After Nero's death, subsequent emperors officially damned his legacy and destroyed most of whatever remained of Nero's first castle after the great fire. However, excavations, begun in the 18th century and continued afterwards, brought to light some fragmentary complexes.

"Based on the archaeological evidence, we have produced the first ever 3D virtual reconstruction of the complex," Rea said.

Covered by precious polychrome marbles, with frescoed ceilings enriched with gold, glass paste and lapis lazulis, the palace predated the grandiose layout of the Domus Aurea, or golden palace, in its architectural innovation, refined opulence, and creative use of light and water.

"It was right here that Nero relaxed in the torrid summer days," Maria Antonietta Tomei, director of the Palatine and Roman Forum and a curator of the exhibition, said.

According to Tomei, one of the most impressive areas in the complex was the fountain court, or nymphaeum, which could be reached through two symmetrical stairs.

An elaborate fountain and cascades, modeled to represent the scaenae frons (the decorated background of a Roman theater), occupied a gently curving wall.

On the opposite side, stood a pavilion supported by twelve columns where the emperor once relaxed.

Other lavishly decorated rooms, filled with variegated marbles and frescoes featuring epic scenes, extended on the sides of the fountain court.

Italy's junior culture minister Francesco Maria Giro explained to reporters touring the show that the exhibit is "not an attempt at rehabilitating Nero. It helps to explain his merits, his qualities but also his failings, to give a fuller image."