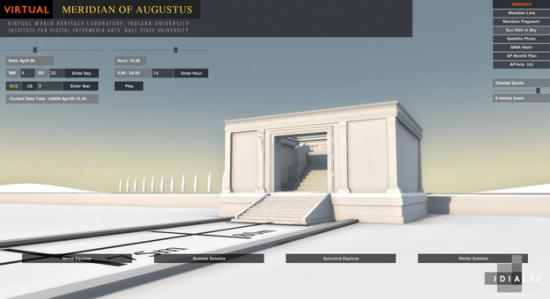 An enduring mystery of archaeology involving a well-known historical site in ancient Rome is being quietly unraveled in Indiana, thanks to a sophisticated computer simulation created by Ball State University digital artists.

An enduring mystery of archaeology involving a well-known historical site in ancient Rome is being quietly unraveled in Indiana, thanks to a sophisticated computer simulation created by Ball State University digital artists.

The simulation, crafted by the Institute for Digital Intermedia Arts (IDIA) and commissioned by Indiana University's School of Informatics and Computing, re-creates the Campus of Mars. The site was built around 9 B.C.E. for the Emperor Augustus just outside the city walls of ancient Rome.

By integrating precise NASA historical data on the movements of the sun and moon with archaeological surveys of the site, researchers can examine suspected solar alignments involving structures that were part of the campus.

Among other things, says John Fillwalk, director of IDIA—a lab of Ball State's Office of Information Technology—the simulation looks at the relationship between the Ara Pacis (or Altar of Peace) and a nearby obelisk. The obelisk was moved by Augustus from its original home in Egypt and installed on the Campus of Mars.

"In simple terms, this site was the largest sundial of the ancient world—although it did much more than keep track of time," says Fillwalk, who is also an associate professor of electronic art at Ball State. "It primarily served as an astronomical calendar. "

The simulation already has helped historians revise a long-held theory about the campus—specifically the relationship between the Egyptian obelisk and the Ara Pacis. For decades, archaeologists have believed that the obelisk was oriented so it would cast its shadow inside of the altar on Sept. 23, the birthday of Augustus.

"This project looks at that question," Fillwalk says. "Did the obelisk align to the altar doorway on that day?"

The simulation shows that it did not—it comes fairly close but does not reach or line up precisely enough to be considered an alignment.

Archaeologists have been unable to research that alignment in real life because the Campus of Mars no longer exists in its original form. What then was the surface of the campus now lies roughly 20 feet below the topsoil of today's Rome—a segment of pavement has been excavated and, in fact, lies in the basement of a building that now sits atop the original location.

In addition, the Ara Pacis—an ornate structure covered with exquisite carvings—has been moved to a museum and the obelisk, too, has been reassembled and moved to a new site.

Fillwalk says a key contribution of the simulation is that it digitally reassembles the ancient campus with precision, allowing archaeologists to explore its workings in ways that were not previously possible.

In fact, Bernard Frischer—an IU professor of informatics who is the lead archeologist on the project and director of the Virtual World Heritage Laboratory—presented a paper on the simulation and its findings this month at the Vatican's Pontifical Academy of Archaeology in Rome. Fillwalk is a co-author of the paper.

Interest in Augustus and the Rome of his day has been on the upswing in Italy because next year will mark the 2,000th anniversary of the emperor's death.

IDIA staff members have been working on the computer simulation for about a year and a half, Fillwalk says, and recently rebuilt it from the ground up after receiving new, more detailed archaeological surveys and measurements of the site.

"We took it back down to the level of data and pixels—reworking it entirely," Fillwalk says. "Interestingly enough, we're basically where we were before, and we have had our process validated independently by several archeoastronomers. So, we feel good about the precision of the simulation. The science and the data behind it are solid."