An underground chamber that was a place of worship for a mysterious cult 2,000 years ago has opened to the public for the first time 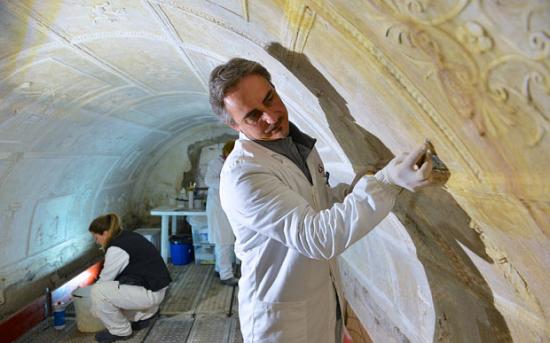 Riccardo Mancinelli, technical director of the team in charge of restoring stucco figures on the walls of the pre-Christian, 1st century, underground basilica of Porta Maggiore Photo: Chris Warde-Jones/The Telegraph

A mysterious Roman basilica built for the worship of an esoteric pagan cult and now lying hidden more than 40ft below street level has opened to the public for the first time.

The basilica, the only one of its kind in the world, was excavated from solid tufa volcanic rock on the outskirts of the imperial capital in the first century AD.

Lavishly decorated with stucco reliefs of gods, goddesses, panthers, winged cherubs and pygmies, it was discovered by accident in 1917 during the construction of a railway line from Rome to Cassino, a town to the south. An underground passageway caved in, revealing the entrance to the hidden chamber.

Archway and stucco figures on the walls of the underground basilica   Photo: Chris Warde-Jones/The Telegraph

A painstaking restoration that has been going on for years has now reached the point where the 40ft-long basilica can be opened to visitors.

The subterranean basilica, which predates Christianity, was built by a rich Roman family who were devotees of a little-known cult called Neopythagoreanism.

Originating in the first century BC, it was a school of mystical Hellenistic philosophy that preached asceticism and was based on the writings of Pythagoras and Plato. 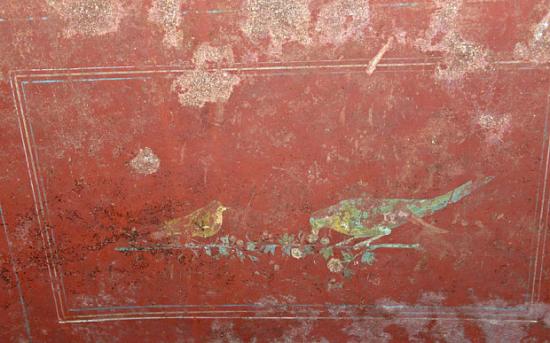 “There were lots of cults worshipped at the time and the empire was in general fairly tolerant towards them," said Dr Giovanna Bandini, the director of the site. "But this one was seen as a threat because it discounted the idea of the emperor as a divine mediator between mortals and the gods.”

The basilica is thought to have been constructed by the influential Statilius family.

But they were accused of practising black magic and illicit rites by Agrippina, the ruthless, scheming mother of the Emperor Nero.

The head of the family, Titus Statilius Taurus, was investigated by the Senate for what Tacitus in his Annals called “addiction to magical superstitions”. He protested his innocence but committed suicide in AD53.

The basilica eventually fell into disrepair and was sealed up during the reign of the Emperor Claudius before being forgotten about.

A dedicated team of experts is restoring the interior of the basilica, scrubbing away mould and removing encrusted deposits of calcium with chemicals, tools and lasers. 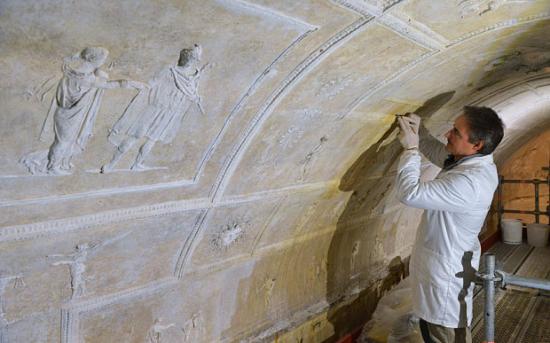 Riccardo Mancinelli, technical director of the team in charge of restoring stucco figures on the walls of the basilica of Porta Maggiore  Photo: Chris Warde-Jones/The Telegraph

Scaffolding platforms have been built in order to allow the restorers to access the arched ceiling, which is covered in stucco reliefs, some decayed but others in a remarkable state of preservation.

The restorers remove thick layers of calcium deposits first by hand, with scalpels, and then use small drills.

“They are the sort that you see in a dentist’s surgery,” said Riccardo Mancinelli, the technical director of the project.

The basilica consists of three naves lined by six rock pillars and an apse, all decorated with finely executed images of centaurs, griffins and satyrs.

There are depictions of classical heroes such as Achilles, Orpheus, Paris and Hercules.

The head of Medusa guards the entrance to the chamber, while the lower parts of the walls are painted a deep ox-blood red, with renditions of wild birds and women in togas.

The basilica, which is entirely hidden to the outside world and accessed via a door masked from the street by a mesh fence, lies directly beneath the railway line. Trains rumble noisily overhead.

“It was dug out of tufa, which is a rock that is easy to excavate. It is the reason that there are so many catacombs beneath Rome,” said Mario Bellini, an engineer involved with the project.

Although the restoration is still under way, the basilica can now be visited by tourists. Groups will be kept small because of the fragility of the monument.

Daniela Duranti, one of the team in charge of restoring stucco figures on the walls of the pre-Christian, 1st century, underground basilica of Porta Maggiore  Photo: Chris Warde-Jones/The Telegraph

“This place is unique in the Roman world in terms of its architecture and design. It was a precursor to the basilicas built during the Christian era, centuries later.”