Archaeologists unearth evidence showing that the Colosseum was colonised by ordinary Romans during the medieval period, centuries after it was used for gladiatorial combat and wild animal hunting spectacles

Archaeologists have found the foundations of homes, terracotta sewage pipes and shards of crockery Photo: METEOWEB.EU

ts gory past as an arena for gladiatorial battles and gruesome public executions is well known, but archaeologists have discovered that the Colosseum later fulfilled a very different role - as a bustling medieval bazaar full of houses, stables and workshops.

As the glory of Rome faded and the empire crumbled in the face of barbarian invasions in the fifth century, the giant arena was colonised by ordinary Romans, who constructed dwellings and shops within its massive stone walls.

Archaeologists have dug beneath some of the 80 arched entrances that lead into the Colosseum and have found the foundations of homes, terracotta sewage pipes and shards of crockery, dating from the ninth century AD.

They believe that people lived within the arena from the ninth century until at least 1349, when it was badly damaged by an earthquake.

One of their most intriguing discoveries is the figurine of a tiny monkey, carved in ivory, which was probably used as a pawn in a chess game.

The dig was carried out by archaeologists and students from the American University of Rome and Roma Tre, another university in the city, in collaboration with cultural heritage experts.

“Thanks to these excavations we’ve been able to identify an area of housing from the late medieval period,” said Rossella Rea, the director of the Colosseum.

“The Colosseum was used as an amphitheatre from around AD80 until about 523AD. It was then inhabited from the end of the ninth century until the 14th century.”

Riccardo Santangeli Valenzani, a professor of medieval archaeology and the director of the dig, said: “By the sixth century, the Colosseum was no longer being used as a gladiatorial arena.”

Historians disagree on when exactly the Roman Empire collapsed, but it was in a state of gradual decline from at least the fourth century AD.

Romulus Augustus, the last emperor of the Western Roman Empire - by then separated from Byzantium in the east - was deposed by a Germanic chieftain in 476 AD.

Construction of the Colosseum began under the Emperor Vespasian in AD 72 on the site of a newly drained lake in the grounds of Nero’s Domus Aurea, a huge palatial complex.

The Colosseum could seat around 50,000 spectators and could be emptied in just 10 minutes via its multiple exits, known in Latin as “vomitoria”. 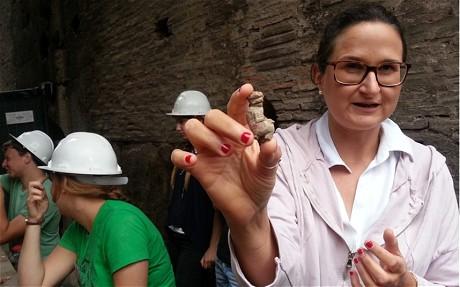 The amphitheatre was inaugurated in AD 80 with a lavish spectacle in which an estimated 5,000 wild animals, including leopards and lions, were killed.

After the fall of the Roman Empire, it was plundered for stone, and the iron and lead clamps that held the massive blocks of travertine together were also pillaged.

The Colosseum is currently undergoing a cleaning and restoration project, with the £20 million cost of the work paid for by Tod’s, an Italian company that makes high-end shoes and leather bags.

The first phase of the cleaning is due to be completed on July 7, after which restorers will move onto a different section of the monument.

The project is expected to be finished in March 2016.