On Quirinal Hill, in area previously held to be a necropolis 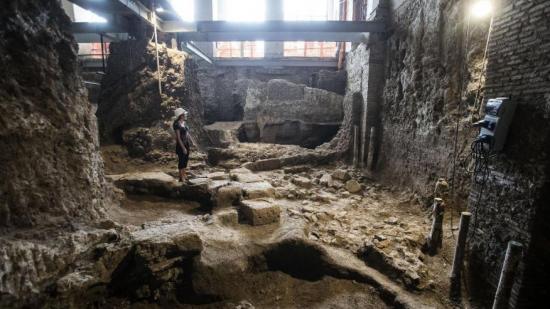 A view of a 6th-century B.C. residence that was discovered in Rome. (AP/ANSA)

A home from the archaic period has been found on the Quirinal Hill in Palazzo Canevari, the former geological institute in the Italian capital.
The sixth-century BC abode had a rectangular layout most likely divided into two rooms, on a tufa stone base and with an entrance possibly preceded by a portico opening onto one of the long sides, with wooden walls covered in clay under a tile roof.
The discovery was made this summer during preliminary archaeological excavations conducted by the superintendent's office on the historic building and is considered one of the most important of recent years, as it redesigns the map of Rome between the sixth and the fifth centuries BC.
It is also remarkable for the good state of conservation of the structure and since it had previously been thought that the area in which it was found was used as a necropolis and not as a residential area. Since 2003, Palazzo Canevari - which is now owned by the Italian savings and loans bank, which took charge of the excavations when it purchased the property - has been surveyed to see whether ancient relics were on the premises. Following a period of extensive excavations, in 2013 an enormous fifth-century temple was found. And now this latest find, dating back to the time of the Servian Walls, has been considered revolutionary.
"This building is basically absent in archaic Rome, and there are only traces in the Forum area. The home was probably used for about 50-60 years prior to when the temple was built that was discovered in 2013," Mirella Serlorenzi said during a press visit, who directed the excavations on behalf of the superintendent's office. "The position of the house near the temple hints at it being a sacred area, and that whoever lived there was watching over what happened therein. But it is even more important that we can now retro-date the urbanization of the Quirinal zone. The Servian Walls encircled an area that was already inhabited and not a necropolis." "This means that Rome at the beginning of the sixth century was much larger than what we expected and not closed in around the Forum," she added, stressing that "the excavations will continue for months more. But everything depends on what we find." Superintendent for the Colosseum, il Museo Nazionale Romano and the archaeological area of Rome, Francesco Prosperetti, said that he hoped "adequate valorization" of the find would ensue. The issue now is over how to let the public enjoy the find, located as it is in a privately held building that may soon lodge the offices of the Italian savings and loans bank. "We are weighing project proposals for making the building into a museum," he said, ensuring "use compatible with the purpose of the building and that the excavations will not be covered over."

A partial view of a 6th-century B.C. residence that was discovered in Rome. (AP/ANSA)