World’s first Wiffle Ball or ancient Roman Chia Pet -- we asked you to explain what distinguished archeologists could not. What in the world is a "Roman dodecahedron?”

This mysterious object, named for its 12 sided shape, is generally made of bronze or stone and ranges in size from 4 to 11 centimeters. 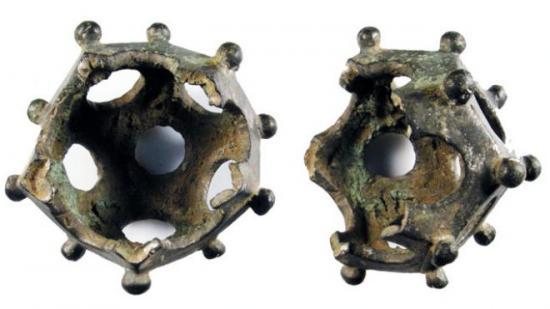 Most of you believed the Romans planted these objects to later mystify future generations. Or that they were something as simple as a paper weight. What do the experts think?

“I have no secret special idea that I think is exactly correct,” said Sebastian Heath, Clinical Assistant Professor at the Institute for the Study of the Ancient World at New York University. “It doesn’t stand as a central concern of Roman archeology, but it would be interesting to know what these could be.”

One reader suggested the dodecahedron may be the world’s first jingle bell.

“We have actual bells from the ancient world and they are well known with the use of sound in the ancient ceremony,” said Heath. “Maybe, sure possible, but there is no conclusive evidence.”

Another reader proposed the objects were used for medicinal purposes by heating the dodecahedrons and massaging areas of pain.

“Modern practices of heating objects and putting them on the body to cure pain were beyond anything that we can prove,” said Heath.

One comment we received suggested that the dodecahedrons were used as fishing net weights.

“We have fishing net weights that don’t look like that,” said Heath. “There’s a lot of details in these things and it’s too overdone to be just a fishing weight.”

Their intricate design lead to suggestions that they might have been purely for decoration.

“Are they only decorative?” said Heath. “That’s probably a little too minimalist. Someone did take the time to make them. And they are handmade, even though we do see some repetition in the design.

Many readers believed the dodecahedrons may have been some sort of children’s game, such as jacks.

“That’s the kind of thing that can be the case, but why do we segment them into the world of children as opposed to other ways people interacted in the ancient world.”

Dr. Heath was extremely impressed with the flood of suggestions we received and he encourages the discussion to continue.

“These are all good ideas, but any of these explanations are plausible,” said Heath. “Archeologists welcome people’s ideas and it’s great that the public gets to think about this. I’m all for people thinking and engaging with the ancient world.”

Roman pet rock, primitive hand grenade, or a magic eight ball with 12 sides, the mystery of the Roman dodecahedron may never be solved.