For years, it was widely believed that the ancient Tune ship on display at the Viking Ships Museum in Oslo was used mainly as a so-called “grave ship,” perhaps even built for the purpose of being buried in the grave of an important Viking. Now a new doctoral dissertation claims that it was not only an ocean-going sailing vessel, but even grounded in its time and underwent repairs. 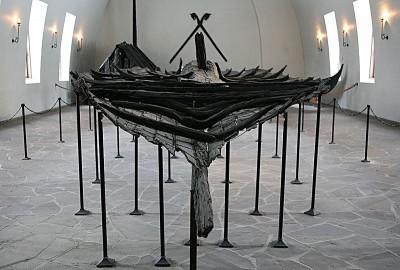 The Tune ship is the lesser-known and in the poorest condition of the three vessels on display at the museum. It was discovered on a farm on Rolvsøy, north of Fredrikstad, and excavated from a burial mound in 1867.

The grave was unusually large, measuring 80 meters in diameter and around four meters high, according to the Museum of Cultural History at the University of Oslo. The vessel, built around 900AD, was best preserved in the areas where it had been buried under thick clay.

Its remnants, however, paled when the stately Gokstad ship was discovered in 1880 and the Oseberg ship in 1903-04 on the other side of the Oslo Fjord. Now, archaeologist Knut Paasche of the Norwegian Institute for Cultural Heritage Research (NIKU) maintains in his newly finished doctoral dissertation that the Tune ship was also used on the high seas.

“Six planks forward on the starboard side are extended at the same place,” Paasche told newspaper Aftenposten this week. “No boatbuilder would do that, not even in Viking times. Repairs to the hull show in all clarity that the ship was damaged under the water line, that is, it had grounded.”

Paasche doesn’t believe the Tune ship was a ceremonial ship that only was rowed inland until it was brought ashore and used in the burial mound. His studies revealed both ruts and signs of wear and tear under the keel, which he contends show that the ship was in use for a long time.

“The discoveries show that the Tune ship was in use for several years before it wound up in the grave,” he told Aftenposten.

The Cultural History Museum now reports as well that the vessel “has probably been a fast, ocean-going vessel.” Right behind the mast, a burial chamber was built and in it lay a man. Even though the grave had been plundered before its excavation, research has revealed remains of burial gifts, parts of a ski, the skeleton of a horse and remnants of his weapons including a sword handle.

Paasche, using data scanning, has reconstructed the ship in full. That adds to the knowledge of the third ship in the Oslo museum.

“While the Gokstad ship was a large ocean-going trading vessel, and the Oseberg ship close to a pleasure yacht, the Tune ship was a fast-sailing courier ship along the coast,” Paasche told Aftenposten. He said it was equipped with unusually strong rigging for such a small vessel that also was built for 12 oarsmen.

Paasche believes the craftmanship also suggests that early residents of today’s Norway were sailing long before Viking times, given the knowledgeable boat-building behind the Tune ship. He said such building techniques could only have been rooted in maritime experience and handed down through generations.