The Emperor's country estate is aligned to meet the solstices. 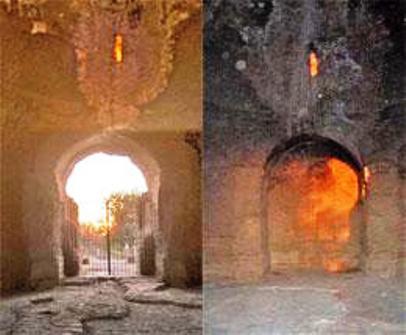 On the solstice, the Sun shines into the Roccabruna building (left), and illuminates the opposite wall (right).M. De Franceschini

Hadrian's villa 30 kilometres east of Rome was a place where the Roman Emperor could relax in marble baths and forget about the burdens of power. But he could never completely lose track of time, says Marina De Franceschini, an Italian archaeologist who believes that some of the villa's buildings are aligned so as to produce sunlight effects for the seasons.

For centuries, scholars have thought that the more than 30 buildings at Hadrian's palatial country estate were oriented more or less randomly. But De Franceschini says that during the summer solstice, blades of light pierce two of the villa's buildings.

In one, the Roccabruna, light from the summer solstice enters through a wedge-shaped slot above the door and illuminates a niche on the opposite side of the interior (see image). And in a temple of the Accademia building, De Franceschini has found that sunlight passes through a series of doors during both the winter and summer solstices.

"The alignments gave me a new key of interpretation," says De Franceschini, who says that the two buildings are connected by an esplanade that was a sacred avenue during the solstices. Based on ancient texts describing religious rituals and study of recovered sculptures, she thinks the light effects were linked to religious ceremonies associated with the Egyptian goddess Isis, who was adopted by the Romans.

De Franceschini, who works with the University of Trento in Italy, will publish a book1 this summer describing the archaeoastronomical work. She credits two architects, Robert Mangurian and Mary-Ann Ray, for initially noticing the light effect in Roccabruna.

Robert Hannah, a classicist from the University of Otago in New Zealand, says that De Franceschini's ideas are plausible. "They're certainly ripe for further investigation," he says.

Hannah, who is currently seeking to pin down alignments associated with star rises in Greek temples in Cyprus, believes that the Pantheon, a large temple in Rome with a circular window at the top of its dome, also acts as a giant calendrical sundial2, with sunlight illuminating key interior surfaces at the equinoxes and on 21 April, the city's birthday.

Few classical buildings have been investigated for astronomical alignment, says Hannah, partly because it is much easier to check for alignments in prehistoric structures such as Stonehenge, which do not have potentially contradictory artefacts.

Jarita Holbrook, a cultural astronomer at the University of Arizona in Tucson, is also not surprised by the solar alignments at Hadrian's villa. They are "a common part of most cultures", she says. But, she adds, it's also easy for buildings to be coincidentally aligned with astronomical features.

De Franceschini plans to spend next week's summer solstice at Hadrian's villa, in the hope of documenting the light effects at Apollo's temple more carefully. Last year's summer solstice was rainy, she says. "I hope that this year we will get better pictures."