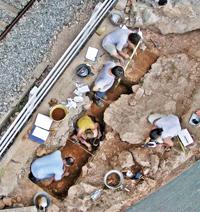 On goimg excavation of a collapsed rock shelter that was used by Neanderthals suggests that our extinct human relatives organized their living spaces according to tasks, researchers say.

In a paper published recently in the Canadian Journal of Archaeology, researchers examined artifacts recovered at Riparo Bombrini, in northwest Italy, and concluded that their dwelling was organized around such activities as butchering animals, shaping tools and building fires.

“There has been this idea that Neanderthals did not have an organized use of space, something that has always been attributed to humans,” said lead study author Julien Riel-Salvatore, an assistant professor of anthropology at the University of Colorado-Denver.

“We found that Neanderthals did not just throw their stuff everywhere but, in fact, were organized and purposeful when it came to domestic space,” Riel-Salvatore said in a prepared statement.

The archaeological site, which was severely destroyed during railroad construction, hosted both Neanderthals and humans. Researchers focused on three levels of the cave that Neanderthals used roughly 45,000 years ago.

Riel-Salvatore and his colleagues wrote that the cave was probably used at times as a permanent residence, and as a logistical base at other times. It’s for this latter use that researchers noticed the greatest organization.

Specifically, researchers found evidence of fire building, or “hearths” toward the rear wall of the cave, while stone tools and chips, as well as animal materials, were found outside the cave.

“This may suggest an effort to keep activities associated with the production of noxious debris segregated from those parts of the shelter that were more enclosed and that, possibly, were associated with activities such as sleeping and socializing next to hearths,” authors wrote.

Researchers cautioned that their conclusions were made on a roughly 15-square-foot preliminary excavation, and that further work was necessary to confirm their observations.

Among other findings, the researchers noted the presence of edible shellfish remains throughout the cave dwelling, as well as large amounts of ocher. Study authors said they were unclear as to what the ocher was used for, but speculated that it may have been used during animal butchering or in processing animal hides.

“Neanderthals could have used it for tanning hides, for gluing, as an antiseptic or even for symbolic purposes,” Riel Salvatore said of the ocher. “We really can’t tell at this point.”