Once Hidden by Forest, Carvings in Land Attest to Amazon’s Lost World 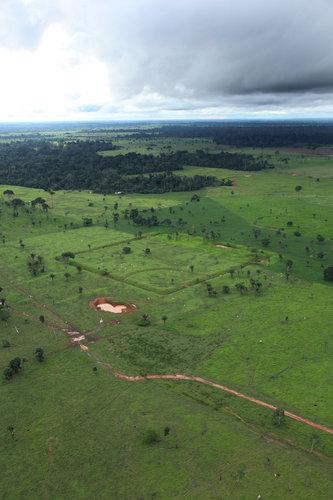 Douglas Engle for The New York Times   -  Geoglyphs, geometric designs carved into the earth, have become 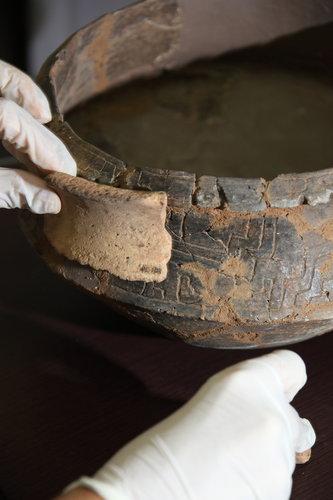 Douglas Engle for The New York Times  -  Pre-Columbian artifacts, found near some of the geoglyphs in Acre State, offer clues to their origin.

As he cleared trees on his family’s land decades ago near Rio Branco, an outpost in the far western reaches of the Brazilian Amazon, a series of deep earthen avenues carved into the soil came into focus.

“These lines were too perfect not to have been made by man,” said Mr. Araújo, a 62-year-old cattleman. “The only explanation I had was that they must have been trenches for the war against the Bolivians.”

But these were no foxholes, at least not for any conflict waged here at the dawn of the 20th century. According to stunning archaeological discoveries here in recent years, the earthworks on Mr. Araújo’s land and hundreds like them nearby are much, much older — potentially upending the conventional understanding of the world’s largest tropical rain forest.

The deforestation that has stripped the Amazon since the 1970s has also exposed a long-hidden secret lurking underneath thick rain forest: flawlessly designed geometric shapes spanning hundreds of yards in diameter.

Alceu Ranzi, a Brazilian scholar who helped discover the squares, octagons, circles, rectangles and ovals that make up the land carvings, said these geoglyphs found on deforested land were as significant as the famous Nazca lines, the enigmatic animal symbols visible from the air in southern Peru.

“What impressed me the most about these geoglyphs was their geometric precision, and how they emerged from forest we had all been taught was untouched except by a few nomadic tribes,” said Mr. Ranzi, a paleontologist who first saw the geoglyphs in the 1970s and, years later, surveyed them by plane.

For some scholars of human history in Amazonia, the geoglyphs in the Brazilian state of Acre and other archaeological sites suggest that the forests of the western Amazon, previously considered uninhabitable for sophisticated societies partly because of the quality of their soils, may not have been as “Edenic” as some environmentalists contend.

Instead of being pristine forests, barely inhabited by people, parts of the Amazon may have been home for centuries to large populations numbering well into the thousands and living in dozens of towns connected by road networks, explains the American writer Charles C. Mann. In fact, according to Mr. Mann, the British explorer Percy Fawcett vanished on his 1925 quest to find the lost “City of Z” in the Xingu, one area with such urban settlements.

In addition to parts of the Amazon being “much more thickly populated than previously thought,” Mr. Mann, the author of “1491,” a groundbreaking book about the Americas before the arrival of Columbus, said, “these people purposefully modified their environment in long-lasting ways.”

As a result of long stretches of such human habitation, South America’s colossal forests may have been a lot smaller at times, with big areas resembling relatively empty savannas.

Such revelations do not fit comfortably into today’s politically charged debate over razing parts of the forests, with some environmentalists opposed to allowing any large-scale agriculture, like cattle ranching and soybean cultivation, to advance further into Amazonia.

Scientists here say they, too, oppose wholesale burning of the forests, even if research suggests that the Amazon supported intensive agriculture in the past. Indeed, they say other swaths of the tropics, notably in Africa, could potentially benefit from strategies once used in the Amazon to overcome soil constraints.

“If one wants to recreate pre-Columbian Amazonia, most of the forest needs to be removed, with many people and a managed, highly productive landscape replacing it,” said William Woods, a geographer at the University of Kansas who is part of a team studying the Acre geoglyphs.

“I know that this will not sit well with ardent environmentalists,” Mr. Woods said, “but what else can one say?”

While researchers piece together the Amazon’s ecological history, mystery still shrouds the origins of the geoglyphs and the people who made them. So far, 290 such earthworks have been found in Acre, along with about 70 others in Bolivia and 30 in the Brazilian states of Amazonas and Rondônia.

Researchers first viewed the geoglyphs in the 1970s, after Brazil’s military dictatorship encouraged settlers to move to Acre and other parts of the Amazon, using the nationalist slogan “occupy to avoid surrendering” to justify the settlement that resulted in deforestation.

But little scientific attention was paid to the discovery until Mr. Ranzi, the Brazilian scientist, began his surveys in the late 1990s, and Brazilian, Finnish and American researchers began finding more geoglyphs by using high-resolution satellite imagery and small planes to fly over the Amazon.

Denise Schaan, an archaeologist at the Federal University of Pará in Brazil who now leads research on the geoglyphs, said radiocarbon testing indicated that they were built 1,000 to 2,000 years ago, and might have been rebuilt several times during that period.

Initially, Ms. Schaan said, researchers, pondering the 20-foot depth of some of the trenches, thought they were used to defend against attacks. But a lack of signs of human settlement within and around the earthworks, like vestiges of housing and trash piles, as well as soil modification for farming, discounted that theory.

Researchers now believe that the geoglyphs may have held ceremonial importance, similar, perhaps, to the medieval cathedrals in Europe. This spiritual role, said William Balée, an anthropologist at Tulane University, could have been one that involved “geometry and gigantism.”

Still, the geoglyphs, located at a crossroads between Andean and Amazonian cultures, remain an enigma.

They are far from pre-Columbian settlements discovered elsewhere in the Amazon. Big gaps also remain in what is known about indigenous people in this part of the Amazon, after thousands were enslaved, killed or forced from their lands during the rubber boom that began in the late 19th century.

For Brazil’s scientists and researchers, Ms. Schaan said, the earthworks are “one of the most important discoveries of our time.” But the repopulation of this part of the Amazon threatens the survival of the geoglyphs, after being hidden for centuries.

Forests still cover most of Acre, but in cleared areas where the geoglyphs are found, dirt roads already cut through some of the earthworks. People live in wooden shacks inside others. Electricity poles dot the geoglyphs. Some ranchers use their trenches as watering holes for cattle.

“It’s a disgrace that our patrimony is treated this way,” said Tiago Juruá, the author of a new book here about protecting archaeological sites including the earthworks.

Mr. Juruá, a biologist, and other researchers say the geoglyphs found so far are probably just a sampling of what Acre’s forests still guard under their canopies. After all, they contend that outside of modern cities, fewer people live today in the Amazon than did before the arrival of Europeans five centuries ago.

“This is a new frontier for exploration and science,” Mr. Juruá said. “The challenge now is to make more discoveries in forests that are still standing, with the hope that they won’t soon be destroyed.”