A colorful hand tool discovered in Oregon, and described as an “ancient Swiss army knife,” may be the oldest artifact yet found in western North America, archaeologists say.

The simple stone tool, hewn from a piece of bright orange agate, was unearthed near a shallow cave that has already turned up evidence of early human occupation — including stone points, tools, and charcoal-stained hearths — dating back as much as 12,000 years. 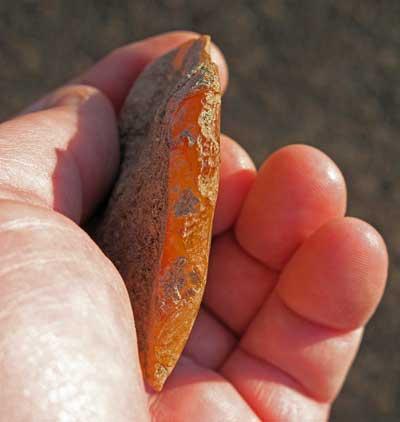 But this artifact was found even deeper in the region’s sandy clay, beneath a layer of volcanic ash that experts have found to be 15,800 years old.

If its age is confirmed, the tool would be nearly 3,000 years older than the widespread artifacts of the Clovis culture, once thought to be the continent’s earliest inhabitants.

“This is really exciting,” said Stephen Baker, spokesman for the Oregon office of the U.S. Bureau of Land Management, in an interview. “But of course there’s more research to do.”

The hand-sized tool was first unearthed in 2012 by the University of Oregon’s archaeology field school, at a site in south-central Oregon known as Rimrock Draw Rockshelter, on BLM land.

The fact that it was found beneath — and was therefore presumably older than — the layer of ancient ash was “fascinating” in itself, Baker said.

But last week, a chemical analysis of the artifact revealed that it also contained traces of proteins from bison, confirming that it had been used as a tool.

“Getting this bison residue further corroborated the idea that it was a tool, likely used for butchering,” Baker said.

Dr. Patrick O’Grady of the University of Oregon, who has been leading the excavations, said that the discovery came about after his field school uncovered debris from an ancient rockfall near the cave.

“Our excavation units had reached a jumbled layer of rockfall that appeared to be the result of a collapse of portions of the rockshelter face,” O’Grady said in an interview.

“We wanted to break that material up and clear a path so we could continue excavating to the bedrock underneath.” 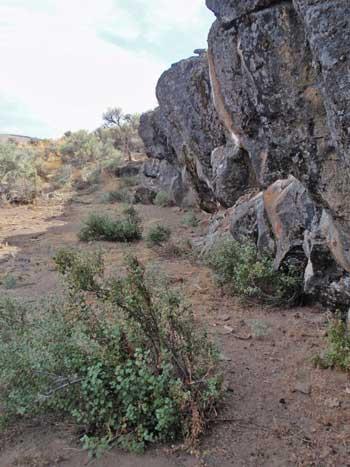 Now sagebrush country, the terrain around Rimrock Draw Rockshelter was likely much wetter when the artifacts found there were originally used. (Courtesy University of Oregon Archaeological Field School)

Beneath the debris, the team found large fragments of tooth enamel from an extinct species of camel.

And beneath those, they hit a sudden, even layer of volcanic ash and rock, called tephra.

Experts from Washington State University analyzed the ash, and were able not only to radiocarbon date it to about 15,800 years ago, but were also able to isolate its source: Washington’s Mount St. Helen’s.

Baker, of the BLM, said researchers quickly identified the object as a tool.

“When they found it, they kind of joked that it was like an ancient swiss army knife,” he said.

“One edge, they believe, was used for scraping animal hide, and another side that’s been worn down over the years they believe was used for carving wood or bone. So, there are a couple of theories, but they think this is kind of a multi-purpose tool.”

The archaeologists were also struck by the tool’s unusual material, he added.

“It’s this bright orange agate,” Baker said. “In that area, there’s a lot of obsidian, but they’d never seen this material in that area before. So it really raises a lot of questions.

“They’re fascinated with, how did this tool get here? Where did it come from? What did they use it for?”