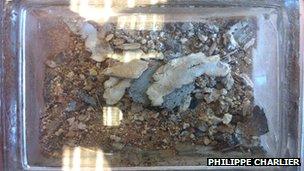 The team used forensic techniques to examine the King's heart, which is now a brown powder

The mummified heart of King Richard I has been analysed by forensic experts.

When the English monarch, nicknamed Richard the Lionheart, died in 1199 his heart was embalmed and buried separately from the rest of his body.

Its condition was too poor to reveal the cause of death, but the team was able to rule out a theory that he had been killed by a poisoned arrow.

The researchers were also able to find out more about the methods used to preserve his organ.

The study is published in the journal Scientific Reports.

The medieval king became known as Richard the Lionheart because of his reputation as a courageous military leader.

He was central to the Third Crusade, fighting against the Muslim leader Saladin.

Although he ruled England, he spent much of his time in France, and was killed there after being hit by a crossbow during a siege on a castle. 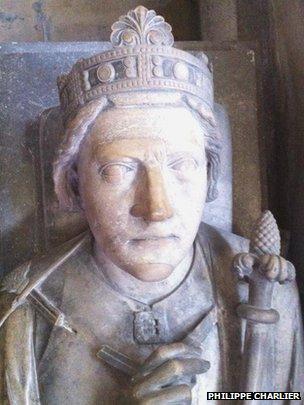 After his death, his body was divided up - a common practice for aristocracy during the Middle Ages.

His entrails were buried in Chalus, which is close to Limoges in central France. The rest of his body was entombed further north, in Fontevraud Abbey, but his heart was embalmed and buried in the cathedral of Notre Dame in Rouen.

The remains of his heart - now a grey-brown powder - were locked away in a small lead box, and discovered in the 19th Century during an excavation.

But until now, they had not been studied in detail.

To find out more, a team of forensic specialists and historians performed a biological analysis.

Dr Philippe Charlier, a forensic scientist from Raymond Poincare University Hospital, in France, said: "We carried out exactly the same kind of analysis that we would perform on an exhumed body for forensic purposes.

"We did a microscopic examination, toxicological analysis and also a pollen analysis."

The heart was too badly decomposed to confirm exactly how the king died - most historians believe gangrene or septicaemia from his wound would have been the cause.

However, another, less widespread theory put forward in a medieval chronicle is that Richard I may have been killed by an arrow coated in poison.

But Dr Charlier said his tests revealed that this probably was not the case.

"Our toxicological analysis showed no presence of any arsenic or any other metals, so we haven't found any proof of any contamination during the end of Richard the Lionheart's life," he explained.

"We have no confirmation that he would have been poisoned: there is no argument for this."

The team found pollen in the sample, including grains from poplar and bellflower. This suggests that Richard I died at the end of April, May or the beginning of June, as these plants are in flower then. In the history books, his date of death is given as 6 April 1199. 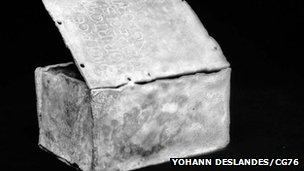 The heart was buried in a small lead box, which was discovered in 1838 during an excavation

The analysis also revealed much more about the techniques that were used to preserve his heart - providing an insight into medieval religious rituals.

"For example, we found frankincense. This is the only case known of using frankincense - we have never found any use of this before. This product is really devoted to very, very important persons in history."

The heart, which was wrapped in linen, also had traces of myrtle, daisy, mint and possibly lime.

The scientists think these would have been used for their smell, to give the King an "odour of sanctity", which would be "similar to Christ".

They also found mercury, which would have been used stop the heart from decomposing.

Dr Charlier said that during the post-mortem, they used up as little material as possible.

He explained: "We wanted to conserve it for the future generations.

"These are not only samples, they are also human remains and we have to respect them."

Mark Ormrod, professor in history from the University of York, said the research was extremely interesting.

"That consciousness of using very high-quality herbs and spices and other materials that are much sought after and rare does add to that sense of it being Christ-like in its quality," he said.

"Medieval kings were thought to represent the divine on Earth - they were set apart form other lay people and regarded as special and different. So that treatment of the heart strikes me as being absolutely credible."

He added that it was rare to get a forensic insight into the remains of medieval kings - and that this study and the work done on the remains of Richard III, who was recently found buried under a car park in Leicester, were unusual.

He said: "Generally speaking, when human remains are found on consecrated ground, the church, the state and the law all prevent one from undertaking any scientific analysis of them, so the opportunities to do these kinds of things are very rare."