Ancient Native American settlements in Rice County, and the well-known Serpent Intaglio are thought to be at least 600 years old. WSU anthropologist Donald Blakeslee, archeologists and others plan an expedition to find out more about the ancient civilization that made their home in Kansas. 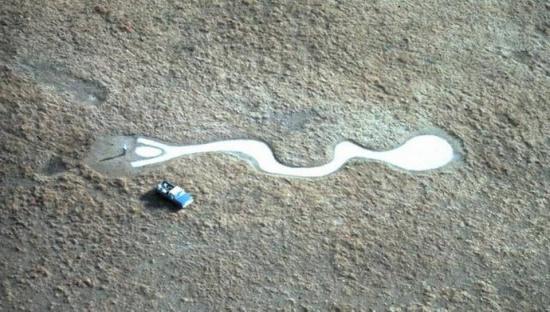 Ancestors of the Wichita tribe cut this 160-foot-long image of a serpent into the sod of Rice County, roughly 600 years ago. This photo was taken in the 1980s when an archaeologist poured biodegradable lime into the cut to highlight the shape.The Coronado Quivira Museum/Courtesy

The serpent was cut into the sod roughly 600 years ago, Blakeslee said, before Columbus and before small pox and other diseases decimated Native American tribes like the ancestors of the Wichita who lived here for hundreds of years. 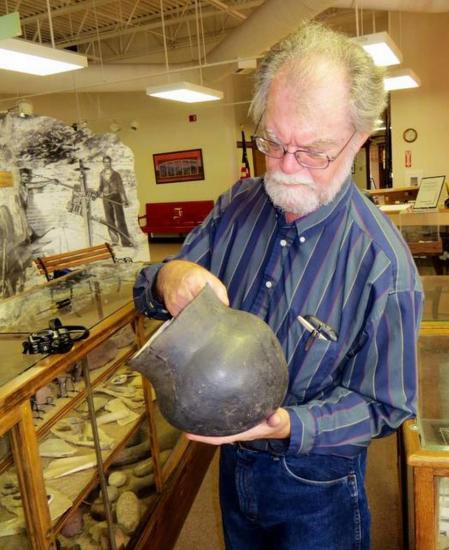 Donald Blakeslee, an archaeologist and anthropologist from Wichita State University, examines a cooking pot found in archaeological digs in Rice County. The hand-crafted pot was made by ancestors of the Wichita tribe, in thickly populated towns of thousands of people, Blakeslee said. At the Coronado Quivira Museum in Lyons, Kan.Roy Wenzl/The Wichita Eagle

A replica of the grass lodges lived in by the ancestors of the Wichita tribe, hundreds of years ago in Rice County, Kan. This one is about ten feet wide; the real ones were often 35 feet across. They would dig the floor down two feet down, build a wood frame, then add the prairie grass thatching. From a diorama in the Coronado Quivira Museum, Lyons, Kan.Roy Wenzl/The Wichita Eagle

Archaeologist Donald Blakeslee, at the Tobias archaeological site in Rice County, standing in a depression in the ground where a lodge once stood. Hundreds of big bee-hive shaped grass lodges once stood in what is now a hay field here; Coronado likely visited this village in 1541 when he came to Kansas looking for gold.Roy Wenzl/The Wichita Eagle

Tobacco pipe, hand carved from Kansas pipestone obtained by Indian artisans who walked to northeast Kansas to find it. The long pipe is where the tobacco went; the short pipe was where smokers would place the wood pipe stem. In the collection at the Coronado Quivira Museum, Lyons.Roy Wenzl/Wichita State University 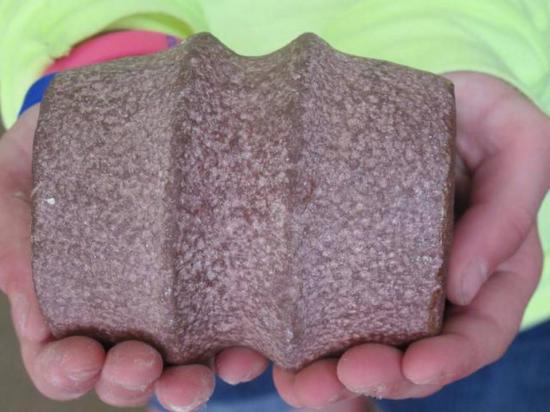 A pink sledgehammer head, hand-crafted from heavy and hard Dakota Quartzite, and used by ancestors of the Wichita tribe in Rice County to break up butchered bison bones for cooking to obtain the nutritious marrow. To obtain the stone, artisans would hike nearly 200 miles to northeast Kansas and hunt for it among debris left hundreds of thousands of years ago by glaciers. In the collection at the Coronado Quivira Museum, Lyons, Kan.Roy Wenzl/The Wichita Eagle

Hand-carved grain milling stones of the ancestral Wichitas. The wide stone is the metate, where the unmilled Indian corn would be placed. Then a Wichita miller would grind the mano, the smaller stone, over the grains until they'd turn to flour. From the Coronado Quivira Museum, Lyons, Kan.Roy Wenzl/The Wichita Eagle 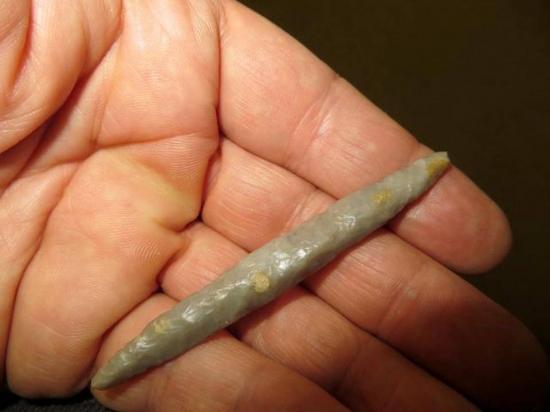 Flint drill, to hand carve Kansas pipestone into tobacco pipes. This drill was originally razor sharp when made hundreds of years ago, but is now smooth along the blade edges. From the Coronado Quivira Museum, Lyons, Kan.Roy Wenzl/The Wichita Eagle