Ribe (Danemark): Excavations at the Domskirke

Excavations at the Domskirke in Ribe, Denmark began in 2008 and analysis of the results lend new insight into early Christianity, where this may have been one of the first places in the country where a small enclave of Christians worshipped and died.

Studies have now shown that there may have been Christian Vikings in Ribe around AD865. Denmark officially became a Christian country around the year AD965 when Harald Bluetooth announced his deed on the Jelling stone (see below). It now seems possible that 100 years before this countrywide conversion, Christian Danish Vikings were living, dying and being buried in Ribe. 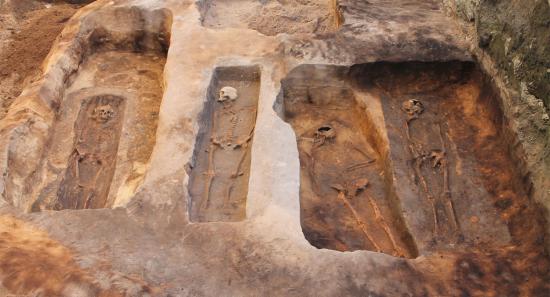 Early Christian burials were found at the Cathedral. The Danish Vikings were buried east west in the typical alignment of Christians. Image: Sydvestjyske Museum

In the excavations conducted by the Southwest Jutland Museums between 2008-2012 around the Domskirke, the archaeologists found over 70 burials from the earliest period of activity. The tombs provide a unique insight into the early Christian burial customs, and have become be a major source of debate in Denmark.

Pagan Vikings were buried with grave goods such as weapons, food, animals, slaves, etc., and their social rank was often marked with pit construction. The burials found at the Cathedral site had no grave goods and were without any indication of social rank. In addition, the dead had been buried east-west and both children and adults were found in the graves surrounded by a cemetery ditch. All this evidence points to the graves being Christian.

Additional examination of the skeletal material using isotope analysis revealed that the vast majority of the buried were local Jutes or newcomers from Zealand/Skåne region. They were interred in this enclosed area during a period between AD 850 years to AD 1050 – making the earliest burials of great significance.

The large Jelling stone is sometimes referred to as “The Birth Certificate of Denmark”. It has many Christian symbols contained in it such as a Christ figure and Harold Bluetooth erected it around 965 in memory of Gorm the Old, and Thyra Danebod. The figure of Christ on the stone shows that the new faith had finally come to Denmark. Up until then, the Church frequently sent envoys to the Danish kings, but not until Harold became King in 958 did the church see a major result. However, the Ribe excavations show that Christianity may have taken root in small enclaves earlier than previously thought.