The timber - with intricate pattern on one side and oval motif at one end - is thought to be a marker post for a tribal boundary, hunting ground or sacred site 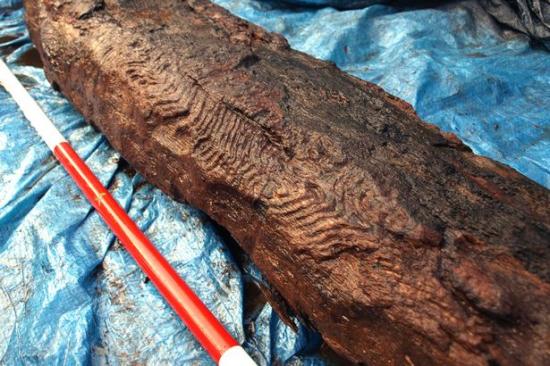 Decorative wood carving found in Maerdy is believed to be one of the oldest ever recovered in Europe as it dates back 6,270 years

Archaeologists have unearthed what is believed to be one of Europe's oldest decorative wood carvings - dating back more than 6,000 - on a Valleys hillside.

The decorative carving was exposed by workmen during the construction of Maerdy Wind Farm in the Rhondda Valley.

Richard Scott Jones, an archaeologist from Heritage Recording Services Wales, said the piece of wood was “priceless” and would be unveiled to the public at the National History Museum in St Fagans next year.

He said the wood is likely to date back 6,270 years to the Late Mesolithic/Early Neolithic period.

“In archaeological circles, this is the is equivalent to winning the lottery,” he said.

“Finding a piece of decorative art like this is incredibly rare in this area of Wales, especially on uplands.

“And in terms of timber, this is truly unique.

“It gives us an idea of the sophistication in terms of artwork around at that time.”

Around 12 lengths of timber were discovered by workmen in waterlogged peat deposits during construction of a substation for the wind farm last September.

One of the pieces, which was elaborately carved, was then removed off-site and cleaned for inspection.

The timber, which measures around 1.7m long, has an intricate pattern along one side and an oval motif at one end.

It is believed to have been used as a tribal marker post indicating a tribal boundary, a hunting ground or a sacred site.

As soon as the significance of the timber was discovered, it was sent to Newport Ship Centre for temporary preservation in a water holding tank and 3D laser scanning.

Experts from the University of Wales Trinity St David, the Glamorgan-Gwent Archaeological Trust and a number of paleo-entomologists also examined the find.

Further excavation was carried out at the wind farm site in the hope of discovering other artefacts - but none were found.

Alan Baker of 2020 Renewables said: “This is a tremendous discovery of real historical significance.

“We had a normal written scheme of archaeological investigation with Rhondda Cynon Taf council as part of the planning conditions for the wind farm.

“This meant putting protective fencing around a number of sites of cultural heritage before starting ground work and while stripping topsoil.

“Also, as part of that agreement we were responsible for the costs associated with the investigation and assessment of the find.

“It’s very exciting that this discovery has proved to be of such international significance and fully justifies our company policy of protecting sites of historic interest.”

The wood is now undergoing a conservation program of wax-glycol treatment at the York Archaeological Trust in York, where it is expected to stay until 2014.

Once this conservation work is completed, it  is hoped that it will be transferred to Cardiff and go on display at the National History Museum.