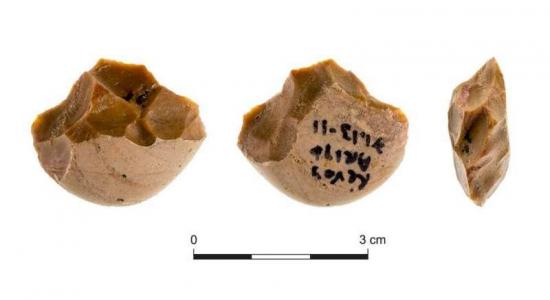 Researchers from the Sonia and Marco Nadler Institute of Archaeology at Tel Aviv University unraveled the function of flint tools known as "chopping tools," found at the prehistoric site of Revadim, east of Ashdod. Applying advanced research methods, they examined use-wear traces on 53 chopping tools, as well as organic residues found on some of the tools. They also made and used replicas of the tools, with methods of experimental archaeology. The researchers concluded that tools of this type, found at numerous sites in Africa, Europe and Asia, were used by prehistoric humans at Revadim to neatly break open bones of medium-size animals such as fallow deer, gazelles and possibly also cattle, in order to extract the nutritious high-calory bone marrow.

Prof. Ran Barkai says, "For years we have been studying stone tools from prehistoric sites in Israel, in order to understand their functions. One important source of tools is Revadim, an open-air site (as opposed to a cave) dating back to 500,000-300,000 years before our time, and rich with remarkably well-preserved findings. Over the years we have discovered that Revadim was a highly favored site, reinhabited over and over again by humans, most probably of the late Homo Erectus species. Bones of many types of game, including elephants, cattle, deer, gazelles and others, were found at the site."

The researchers add that the prehistoric inhabitants of Revadim developed an effective multipurpose toolkit—not unlike the toolkits of today's tradesmen. After discovering the functions of some stone tools found at the site, the researchers now focused on chopping tools—flint pebbles with one flaked, sharp and massive edge. Prof. Barkai says, "The chopping tool was invented in Africa about 2.6 million years ago, and then migrated with humans wherever they went over the next two million years. Large quantities of these tools have been found at almost every prehistoric site throughout the Old World—in Africa, Europe, the Middle East and even China—evidence for their great importance. However, until now, they had never been subjected to methodical lab testing to find out what they were actually used for."

The researchers analyzed a sample of 53 chopping tools from Revadim, looking for use-wear traces and organic residues. Many specimens were found to exhibit substantial edge damage as a result of chopping hard materials, and some also showed residues of animal bones, preserved for almost half a million years! Following these findings, experimental archaeology was also applied: The researchers collected flint pebbles from the vicinity of Revadim, manufactured replicas of prehistoric chopping tools and used them to break open bones of dead medium-size animals. Comparisons between the use-wear traces and organic residues on the replicated tools and those on the prehistoric originals significantly substantiated the study's conclusions.

Prof. Barkai added, "Early humans broke animal bones in two to extract bone marrow. This requires great skill and precision, because shattering the bone would damage the bone marrow. The chopping tool, which we examined in this study, was evidently outstandingly popular, because it was easy to make, and highly effective for this purpose. This is apparently the reason for its enormous distribution over such a long period of time. The present study has expanded our knowledge of the toolkit of early humans—one more step toward understanding their way of life, tracking their migrations, and unraveling the secrets of human evolution."