Bones and tools had been found together before but this is the first evidence of actual animal remains on a tool, Prof. Ran Barkai tells Haaretz. And: Homo erectus in Israel had elephant diet. 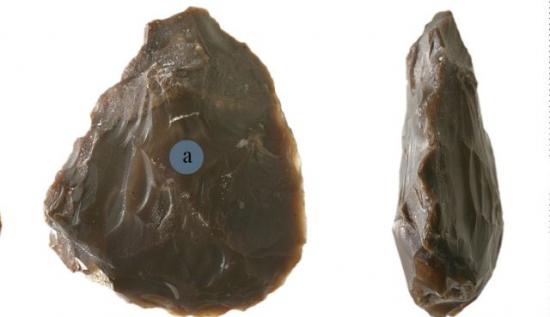 Flint scrapers and large cutting tools with fat residue, for the first time proving their use in processing animal carcasses by early men possibly half a million years ago, have been found in Israel. Moreover, an elephant rib with clear cut marks was found associated with the tools, indicating that the people living here during the Lower Paleolithic era ate big game, says the archaeological team.

The finds at Revadim, an archaeological site in southern Israel dating to nearly 500,000 years ago, cannot teach whether the elephants and other game were hunted or scavenged, but eaten they clearly were. By whom exactly? "Nothing is for sure in archaeology. Based on the time, the culture, the behavior and the assemblage, we assume it was Homo erectus," says Prof. Ran Barkai of Tel Aviv University, and explains:

Revadim is an open site, not a cave: the stereotypical image of prehistoric men living in caves is a bit misleading, it would seem. Many people lived under the open sky, explains Barkai. The site, which had been a happy home for hirsute humans in eons of yore, was found serendipitously because somebody wanted to build a gas station ten years ago. The Israel Antiquities Authority conducted the usual salvage excavation, as is routinely done for building sites in Israel and the extraordinary finds are being studied to this day at Tel Aviv University.

Homo erectus, or whoever, had apparently dwelled repeatedly at the site over thousands of years because it had water – a river, animals to eat, including elephants, and lots of flint to make tools. "It must have been a very good place in the area," Barkai remarks.

The finds at Revadim have been associated with the Lower Paleolithic-Acheulian – a period in early human development characterized by specific forms of stone tool manufacture, such as distinctive oval and pear-shaped hand-axes; and bifacial tools (processed on both sides and scrapers - tools with one modified edge to enable tasks other than straight-forward cutting. Scrapers have been widely associated with working wood or hides but may have been used in butchering too, say the archaeologists.

This is the first time that actual animal remains have been found on the tools, however – specifically, on an Acheulian biface and a scraper, reports the archaeological team, from Tel Aviv University, Ben-Gurion University of the Negev and the University of Rome in a paper published yesterday in Plos One.  The find of the elephant rib with the cut marks was merely icing on the cake, as it were.

It's not news that prehistoric men throughout Africa, Europe and Asia ate pretty much everything that moved, including "proboscideans". (Asked by Haaretz, Barkai says the Revadim inhabitants did also eat small mammals, but not micromammals – such as mice or rats.)

Remains of elephants have been found in association with prrhistoric men spanning hundreds of thousands of years. "Elephants and mammoths were by far the largest terrestrial mammal available for Paleolithic hominins, and these large animals represent a unique food package in terms of the composition of fat and meat," write the scientists.

So, it seems, throughout hundreds of thousands of years in human evolution, pachyderms played an important role in human diet and survival. But very few elephant bones with actual cut marks had ever been found.

"Cut marks are created by a mistake in butchering. When you cut up an animal – if you don't cut properly – the flint cuts the bone, and then is damaged, which is bad," explains Barkai. Not to mention, elephants are beefy: ancient hominids dining on the things didn't necessarily have to cut every last sinew off it to be sated, so why even reach the bone at all.

Of course, whether prehistoric man hunted down the towering beasts or scavenged dead ones is another matter.

Indeed, the evidence found in the past of butchering and marrow extraction could have resulted from finding a dead elephant and taking advantage of it. The finds at Revadim shed no light on the scavenger-hunter argument, the archaeologists spell out – but the discovery of actual fat residue was found on the tools was the first evidence of animal exploitation using stone bifaces and scrapers.

The identification of fat residue on the stone tools from Revadim was done using the Fourier Transform InfraRed (FTIR) spectra, a technology rarely employed on such ancient tools, such as from Lower Paleolithic Acheulian era.

The Revadim site featured enormous amounts of stone tools were found, as well as thousands of animal bones – and although they hail from a number of species, the dominant species in the faunal assemblage was elephant bones. Specifically, bones of the straight tusk elephant, Palaeloxodon antiques, which is long extinct. "There are tons of elephant remains at archaeological sites in Israel until 400,000 years ago. We think that's when they went extinct, since if they hadn't, man would have kept eating them," Barkai says.

A skull and a model of Palaeloxodon antiques, the extinct straight-tusked elephant. Photo by José-Manuel Benito, Wikimedia Commons