Reshaping the horse through millennia

THE COST OF DOMESTICATION   Whole genome sequencing of modern and ancient horses unveils the genes that have been selected by humans in the process of domestication through the latest 5.500 years, but also reveals the cost of this domestication. A new study led by the Centre for GeoGenetics at the University of Copenhagen, in collaboration with scientists from 11 international universities, reports that a significant part of the genetic variation in modern domesticated horses could be attributed to interbreeding with the descendants of a now extinct population of wild horses. This population was distinct from the only surviving wild horse population, that of the Przewalski’s horses. The study has been published in the scientific journal Proceedings of the National Academy of Sciences (PNAS).

The domestication of the horse some 5,500 years ago ultimately revolutionized human civilization and societies. Horses facilitated transportation as well as the circulation of ideas, languages and religions. Horses also revolutionized warfare with the advent of chariotry and mounted cavalry and beyond the battlefield horses greatly stimulated agriculture. However, the domestication of the horse and the subsequent encroachment of human civilization also resulted in the near extinction of wild horses.

The only surviving wild horse population, the Przewalski’s horses from Mongolia, descends from mere 13 individuals, preserved only through a massive conservation effort.

As a consequence of this massive loss of genetic diversity, the effects of horse domestication through times have been difficult to unravel on a molecular level. Says Dr. Ludovic Orlando, Associate Professor at the Centre for GeoGenetics, who led this work:

- The classical way to evaluate the evolutionary impact of domestication consists of comparing the genetic information present amongst wild animals and their living domesticates. This approach is ill suited to horses as the only surviving population of wild horses has experienced a massive demographic decline in the 20th century. We therefore decided to sequence the genome of ancient horses that lived prior to domestication to directly assess how pre-domesticated horses looked like genetically.

Recent advances in ancient DNA research have opened the door for reconstructing the genomes of ancient individuals. In 2013, Ludovic Orlando and his team succeeded in decoding the genome of a ~700,000 year-old horse, which represents the oldest genome sequenced to date. This time, the researchers focused on much more recent horse specimens, dating from ~16,000 and ~43,000 years ago. These were carefully selected to unambiguously predate the beginning of domestication, some 5,500 years ago. The bone fossils were excavated in the Taymyr Peninsula, Russia, where arctic conditions favor the preservation of DNA.

The human reshaping of the horse

While the horse contributed to reshaping human civilization, humans in turn reshaped the horse to fit their diverse needs and the diverse environments they lived in. This transformation left specific signatures in the genomes of modern horses, which the ancient genomes helped reveal. The scientists were able to detect a set of 125 candidate genes involved in a wide range of physical and behavioral traits, by comparing the genomes of the two ancient horses with those of the Przewalski's horse and five breeds of domesticated horses. Says Dr. Dan Chang, post-doctoral researcher at the UCSC Paleogenomics Lab and co-leading author of the study:

- Our selection scans identified genes that were already known to evolve under strong selection in horses. This provided a nice validation of our approach.

- We provide the most extensive list of gene candidates that have been favored by humans following the domestication of horses. This list is fascinating as it includes a number of genes involved in the development of muscle and bones. This probably reveals the genes that helped utilizing horses for transportation.And Dr. Ludovic Orlando from the Centre for GeoGenetics at the University of Copenhagen concludes:

- Perhaps even more exciting as it represents the hallmark of animal domestication, we identify genes controlling animal behavior and the response to fear. These genes could have been the key for turning wild animals into more docile domesticated forms.

The ‘cost of domestication’ in horses

However, the reshaping of the horse genome during their domestication also had significant negative impacts. This was apparent in the increasing levels of inbreeding found amongst domesticates, but also through an enhanced accumulation of deleterious mutations in their genomes relative to the ancient wild horses. This finding supports an earlier theory coined ‘the cost of domestication’, which predicted increasing genetic loads in domesticates compared to their wild ancestors. Says Professor Laurent Excoffier, University of Bern and group leader at the Swiss Institute for Bioinformatics:

- Domestication is generally associated with repeated demographic crashes. Yet, mutations that negatively impact genes are not eliminated by selection and can even increase in frequency when populations are small. Domestication thus generally comes at a cost, as deleterious mutations can accumulate in the genome. This had already been shown for rice and dogs. Horses now provide another example of this phenomenon. 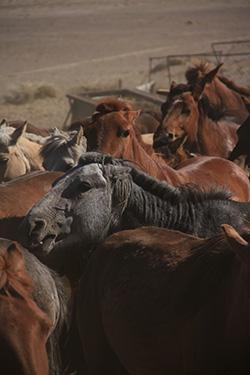 This is something that was only detectable in the horse in comparison to the ancient genomes, as Przewalski’s horses were found to show a proportion of deleterious mutations similar to domesticated horses. Says Hákon Jónsson, PhD-student at the Centre for GeoGenetics, co-leading author of the study:

- The recent near extinction of the Przewalski’s horse population resulted in the persistence of deleterious mutations in the population, following the same mechanism that once led to the accumulation of deleterious mutations in the genomes of domesticated horses. What is striking is that a similar order of magnitude was reached even though this occurred in a much shorter time scale than domestication.

An ancient contribution to the present

In addition, comparison of the ancient and modern genomes revealed that the ancient individuals contributed a significant amount of genetic variation to the modern population of domesticated horses, but not to the Przewalski’s horses. This suggests that restocking from a wild population descendant from the ancient horses occurred during the domestication processes that ultimately led to the modern domesticated horses. Mikkel Schubert, PhD- student at the Centre for GeoGenetics, co-leading author of the study concludes:

- This confirms previous findings that wild horses were used to restock the population of domesticated horses during the domestication process. However, as we sequenced whole genomes, we can estimate how much of the modern horse genome has been contributed through this process. Our estimate suggests that at least 13%, and potentially up to as much as 60%, of the modern horse genome has been acquired by restocking from the extinct wild population. That we identified the population that contributed to this process demonstrates that it is possible to identify the ancestral genetic sources that ultimately gave rise to our domesticated horses.

Online publication in Proceedings of the National Academy of Sciences, 15. December 2014: 'Prehistoric genomes reveal the genetic foundation and cost of horse domestication'.