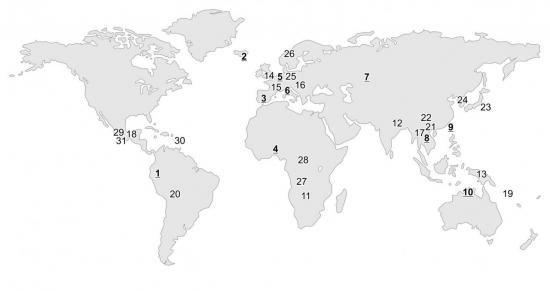 A word like 'Huh?'—used when one has not caught what someone just said—appears to be universal: it is found to have very similar form and function in languages across the globe. This is one of the findings of a major cross-linguistic study by researchers Mark Dingemanse, Francisco Torreira and Nick Enfield, at the Max Planck Institute for Psycholinguistics in Nijmegen, the Netherlands. The study was published in the journal PLOS ONE.

It might seem frivolous to carry out scientific research on a word like 'Huh?' But in fact this little word is an indispensable tool in human communication. Without words like this we would be unable to signal when we have problems with hearing or understanding what was said, and our conversations would be constantly derailed by communicative mishaps. The research is part of a larger investigation of language and social interaction funded by the European Research Council.

Dingemanse and colleagues studied languages from around the world and found that all of them have a word with a near-identical sound and function as English 'Huh?' This is remarkable because usually, words in unrelated languages sound completely different. Compare, for example, these very different-sounding words for 'dog': inu in Japanese, chien in French, dog in English. One might object that this suggests that 'Huh?' is not a word at all. But in a careful phonetic comparison, Dingemanse and colleagues find that it is. Although 'Huh?' is much more similar across languages than words normally should be, it does differ across languages in systematic ways. 'Huh?' is not like those human sounds that happen to be universal because they are innate, such as sneezing or crying. It is a word that has to be learned in subtly different forms in each language.

Why is 'Huh?' so similar across languages? To understand this, Dingemanse and colleagues studied the specific context in which this word occurs. In human communication, when we are somehow unable to respond appropriately, we need an escape hatch: a way to quickly signal the problem. This signal has to be easy to produce in situations when you're literally at a loss to say something; and it has to be a questioning word to make clear that the first speaker must now speak again. Since these functional requirements are fundamentally the same across languages, they may cause spoken languages to converge on the same solution: a simple, minimal, quick-to-produce questioning syllable like English 'Huh?', Mandarin Chinese 'A?', Spanish 'E?', Lao 'A?', or Dutch 'He?'.

The basic principle is well-known from evolutionary biology: when different species live in similar conditions they can independently evolve similar traits, a phenomenon known as convergent evolution. For example, sharks and dolphins have different evolutionary origins but similar body plans, because they live in the same aquatic environment. In the same way, Dingemanse and colleagues propose that words may converge on similar forms when they occur in strongly similar conversational 'environments'. A clear effect of this conversational ecology on the specific shape of linguistic expressions has not been observed before.

Although 'Huh?' may almost seem primitive in its simplicity, a word with this function is not found in our closest evolutionary cousins. Only humans have communication systems in which complex thoughts can be expressed and communicative mishaps can be solved on the spot. Even a humble word like 'Huh?' can teach us a lot about our nature as ultrasocial animals.