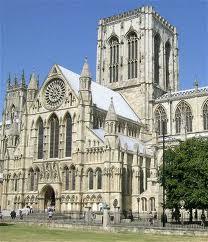 The West Front of York Minster

Buildings and statues constructed of limestone can be protected from pollution by applying a thin, single layer of a water-resistant coating.

That's the word from a University of Iowa researcher and her colleagues from Cardiff University in a paper published in the journal Scientific Reports, from the publishers of Nature. In the study, the researchers report a new way to minimize chemical reactions that cause buildings to deteriorate, according to Vicki Grassian, F. Wendell Miller professor in the UI departments of chemistry and chemical and biochemical engineering.

The coating includes a mixture of fatty acids derived from olive oil and fluorinated substances that increase limestone's resistance to pollution.

"This paper demonstrates that buildings and statues made out of limestone can be protected from degradation by atmospheric corrosion, such as corrosion due to pollutant molecules and particulate matter in air, by applying a thin, one-layer coating of a hydrophobic coating," she says. "We showed in particular that the degradation of limestone from reaction with sulfur dioxide and sulfate particles could be minimized with an application of this coating."

One of the buildings the researchers chose for their study was York Minster, a cathedral located in York, England, and one of the largest structures of its kind in northern Europe. Construction of the current cathedral began in the 1260s, and it was completed and consecrated in 1472.

Grassian says York Minster was a perfect structure to study because its limestone surface has been exposed for decades to acid rain, sulfur dioxide and other pollutants. She notes other historic limestone structures could benefit from the coating, including many in the United States.

She notes other attempts have been made to protect existing stonework in cultural heritage sites; however, those coatings block the stone microstructure and prevent the edifice from "breathing," thus creating mold and salt buildup.

Grassian, along with fellow authors Gayan Rubasinghege and Jonas Baltrusatis of the UI chemistry department, have been studying for years reactions of atmospheric gases with minerals such as limestone. In earlier studies, they have shown through detailed analysis that sulfur dioxide could easily degrade limestone and that this degradation reaction was enhanced in the presence of relative humidity.