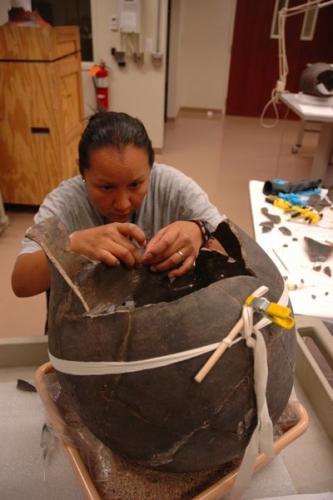 A conservator works on reglueing a prehistoric pot at the National Park Service's Western Archaeological and Conservation Center.

Nitrate is something you usually run across in foods these days, but in the late 19th century and early 20th century it also played a role in camera film. Unfortunately, those cellulose nitrate negatives proved to be extremely flammable.

While that problem was solved in the 1920s and 1930s when Kodak moved to a cellulose acetate, and then cellulose diacetate, coating for their films, that didn't solve the problem for the millions of negatives taken before the switch was made.

At the National Park Service's Western Archaeological and Conservation Center in Tucson, which has roughly 10 million archives and artifacts stored in its 50,000 square-foot facility, thousands of these cellulose nitrate negatives are quite literally being kept on ice -- in explosion-proof freezers -- so they don't spontaneously combust. Once a year conservators pull the negatives out and defrost them to check on their preservation, and then back they go. Unless, of course, someone requests a copy of a photograph first.

Now, it turns out that nitrate played another vexing problem, this time in the world of Southwestern archaeology, in that it was a component of a glue archaeologists would use to piece together prehistoric pots they found out in the field.

This glue has a shelf life, and it's coming to the end for about 650 historic pots from 25 different national park units that are in the center's collection. To address the problem, conservators have been taking these pots apart along their glue seams, removing remnants of the nitrate glue, and putting them back together with a longer-lasting glue. It can take 24-30 hours to complete the task on one pot.

"Those glues have reached their life span, and so they’re starting to let go. So our goal is to get all of those glues replaced in the pots, so the pots don’t fall apart," explains Tef Rodeffer, the Park Service's regional curator. "There's a whole process of taking them down and putting them back together again in a cost-effective manner."

The task is being overseen by one lead conservator, who has a team of four conservation interns and a conservation technician for assistance.

The work is time-consuming.

If all goes as planned, the entire project should be completed next year, she said.