A tumultuous time on the southern Plains is slowly returning to the surface in Oklahoma, where archaeologists have excavated a 250-year-old fortress built by a people known as the Taovaya, who sought refuge there from bands of raiders and Spanish attackers.

The fort was constructed on the northern banks of the Red River — now the boundary between Oklahoma and Texas — in the 1750s, archaeologists say. And it featured an “impressive” array of defenses, including a wooden stockade surrounded by a dry moat and a series of “underground apartments” where Taovaya women and children found safety during battles. 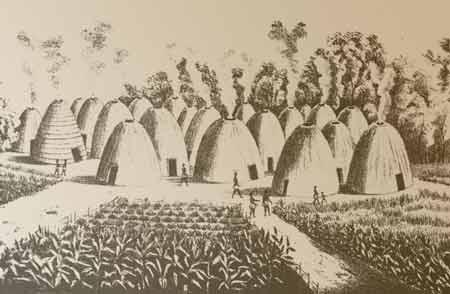 A lithograph from the mid-1800s depicts a Wichita Village in Oklahoma, near the end of the era when the Taovaya were “a major force on the southern Plains,” according to anthropologists.

“As far as I am aware, no similar subterranean structures have been identified at other fortifications on the Plains, or elsewhere in North America,” said the University of Oklahoma’s Dr. Richard Drass, who led the excavation, in an interview.

In addition to unearthing this unique structure, the dig seems to lay to rest a long-standing dispute over where a conflict known as The Battle of the Twin Villages — a failed attempt by Spanish settlers and their Apache allies to conquer the Taovaya in 1759 — took place.

Despite a number of monuments across the river in Texas that testify to the contrary, that battle took place in Oklahoma, not Texas, Drass said.

“Only [this site] matches the descriptions of the setting in the Spanish accounts of the conflict,” he noted in the bulletin of the Oklahoma Anthropological Society.

A detail of a mural now in Mexico depicts the attack by the Taovaya and Comanche on the Spanish Mission San Saba, in what’s now Texas.

Indeed, it was detailed depictions of the unusual fort made around the time of the battle that gave Drass’ team the clues they needed to identify it.

Written descriptions from the 1760s describe the Taovaya fort as a stockade on the riverbank made from “thick posts stuck in the ground in the manner of scissors,” with “a very deep trench” around it and “four subterranean apartments occupying all of its [inner] circumference.”

Not only does the Oklahoma site fit this description, Drass said, but further documentary evidence suggests that the other of the Taovaya “twin villages” — the one commemorated in Texas as the battle site — didn’t exist in 1759.

“It is now pretty much accepted that [the Oklahoma fort] was the site attacked by the Spanish,” Drass told the bulletin.

The Spanish stormed the fort after the Taovaya raided a Texas mission in 1758. But, Drass points out, the original purpose of the fort was not to keep out the Spanish.

Instead, the Taovaya, a subgroup of the Wichita, faced greater and more immediate pressure from neighboring tribes, he said.

“The fortifications built at Wichita villages served as defenses against primarily native groups such as the Apache and Osage,” he observed.

The Osage frequently raided Wichita villages for horses, he said, while Apache groups, “an old enemy of the Wichita,” were being pushed into nearby territory by the Comanche.

By the mid-1700s, this combined pressure had forced the Taovaya to flee their earlier farming settlements in northern Oklahoma and move down to the Red River, Drass explained.

In the 1960s, archaeologists had explored enough of the Red’s banks to find the ruins of the village that the Taovaya had built there. But Drass’ team set out expressly to study the storied fortress that defended it.

“Our excavations were designed to test the nature of the fort construction and specifically to identify the ‘apartments’ described within the fort,” he said. 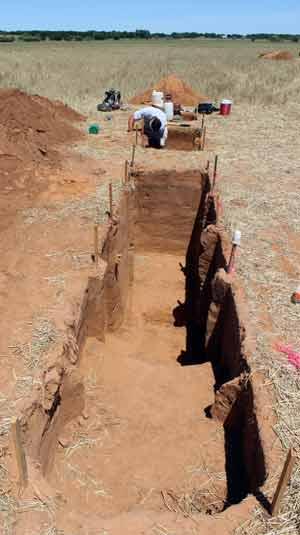 A meter-wide excavation ditch reveals the remains of “subterranean apartments” in the Taovaya fort originally described by Spanish observers in the 1760s. (Photo courtesy Richard Drass)

Their dig revealed two such features, pits about 1.3 meters deep and 7 meters wide, with earthen benches or steps built along the walls, and post holes in the floor where poles held thatched roofs.

Magnetic imaging of the surface suggested the presence of two more such features, Drass added, which would account for the four apartments described by Spanish observers.

“These were said to be for protection of noncombatants — women, children, and old men — and as storage areas for supplies,” Drass said.

“We were very interested in this subterranean ‘apartment,’ as we thought it was a distinctive ditch feature,” he added.

He has only seen it at one other site, he said: the Taovaya village in northern Oklahoma that was abandoned when its inhabitants fled south.

Several meters away from the apartments, the team also found evidence of a moat encircling the site. Despite its medieval connotations, Drass noted, it wasn’t an aquatic feature, but it served the same defensive purpose.

“It would not have contained water,” he said. “It was designed to prevent enemies on horseback from reaching the fort.”

Other finds, meanwhile, were noteworthy mainly because they were in such short supply: artifacts.

Some bison bones, musket balls, arrow points and gun ornaments were found, but none of the dense detritus of day-to-day life, suggesting that the Taovaya didn’t live in the fort on a regular basis, but rather retreated to it during attacks.

An aerial photo shows the faint outline of the fort on the northern bank of the Red River. (Photo courtesy Richard Drass)

In the years following their victory over the Spanish and Apache, the Taovaya became “a major force in the southern Plains,” Drass said, “[but] by the mid-1800s Wichita life had changed significantly, and the tribe was decimated by diseases and conflict.”

His team’s excavations on the Red River have turned up some important details about this pivotal time in the tribe’s history, Drass said, but much more remains to be clarified about how war, trade, and migration changed this group and this corner of the West.

“Historical records provide us some insight into life on the Plains at this time, but archeological research is necessary to fill out the story of Wichita life at time when these people were one of the major groups in the area,” Drass said.

“Our research on these forts is really only just beginning.”