Red Deer Cave (Chine): 'Enigma Man' may be new human species that lived until 11,000 years ago 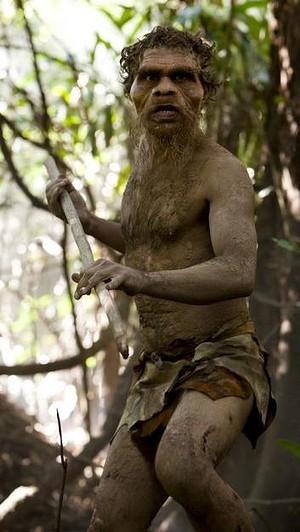 Enigma Man: A figure based on the remains found in a remote cave in South West China.
Has an Australian scientist been instrumental in helping discover a new species of human? And what does this mean for our understanding of human evolutionary history? These are two questions at the heart of a new documentary screening this week on ABC1.

With Enigma Man we follow the groundbreaking research of Aussie paleoanthropologist Darren Curnoe and his Chinese colleague, paleontologist Ji Xueping.

Their study of ancient human remains found in a remote cave in South-west China looks at the idea there may have been another species of human existing alongside our ancestors as recently as 11,000 – 14,000 years ago.

Dubbed the '‘Red Deer Cave people’', these ancient people, or, more precisely, their remains – so similar, yet so physically different from us – are much, much younger than our Neanderthal relatives, posing some seriously interesting questions. Were they really another human species? And if so, what happened to them? Why did they die out? How did they live? And what were their interactions with our own early relatives?

These are indeed big questions, Curnoe  says, and that's what makes the search for answers so fascinating.

“The documentary is about the process of deciding: do we have a new species or not?” Curnoe, who is Associate Professor of evolutionary biology in the School of Biological, Earth and Environmental Sciences at UNSW, explains.

“The fossils just don’t fit with the dominant view in science at the moment about who was around 11,000 years ago or 14,000 years ago, how they relate to us, and how we think of ourselves as humans in relation to nature.

“We tend to think of ourselves as special. So it raises some pretty deep and challenging questions.

“There are views, which I subscribe to, and quite a lot of other people do too, that there are at least 30 different species that are in the fossil record that would be relatives of ours in some sense – some may be ancestors, some may be side-branches that went extinct.

“The classic example is the Neanderthals – everyone has heard of them, even if you don’t know much about them. What we are proposing is that instead of the Neanderthals being the last of the other human-like creatures [before it was] just us, we are in fact saying, well, no, this other group survived until much more recently.”

What is fascinating about this documentary, written and directed by Daniella Ortega, with Electric Pictures, is the dramatic re-enactments and reconstructions of what these people might have looked like. Instead of simply presenting Curnoe and Xueping’s research in a cut-and-dried way, the documentary gives it a distinctly human relatability.

For Curnoe, who had worked with the Red Deer Cave people remains for the better part of eight years, seeing his research come to life was extraordinary.

“I was blown away, actually,” he says, describing the first time he saw an actor in full hair and make-up, looking like the ‘Enigma Man’ – the nickname given to the mysterious remains – he’d been studying.

“I didn’t expect that the reconstructions would be that good and that lifelike. It was actually quite confronting – just incredible,” he says.

“Between Daniella and the guy at make-up effects, we had been emailing, and I was looking at the artistic representations and giving them feedback on how to improve things and make them more anatomically accurate.

“I didn’t actually see anything physical until the day they filmed – I was blown away by the quality of the work.”

“Our drama director Steve Westh and myself embarked on a process with an incredibly talented prosthetic makeup team, Paul Katte and Nick Nicolaou,” Ortega says. “Together with our scientists Darren and Ji we all worked to create the ‘best guess’ as to what these people looked like.

“Over weeks and ultimately months, our ‘man’ developed from sketches, then to models, and finally to moulds that would fit onto our actors.

“It was a fascinating process, very detailed and painstaking, but ultimately our Red Deer Cave people emerged – and they looked real AND right!”

Curnoe says he’s pleased his research, done in collaboration with Xueping, and first published in a peer-reviewed journal in 2012, is reaching a new audience.

“It gets the science across in a pretty entertaining way, but it also gets the value and the meaning of the work across really well,” he says.

“That’s something that’s really pleased me about the collaboration; the way Daniella and her writing really made an incredible effort to get the point across that this is not just esoteric science, but is, in fact, something that touches us very deeply and has some real meaning and value in terms of the way we think about ourselves and the way we relate to the world.”