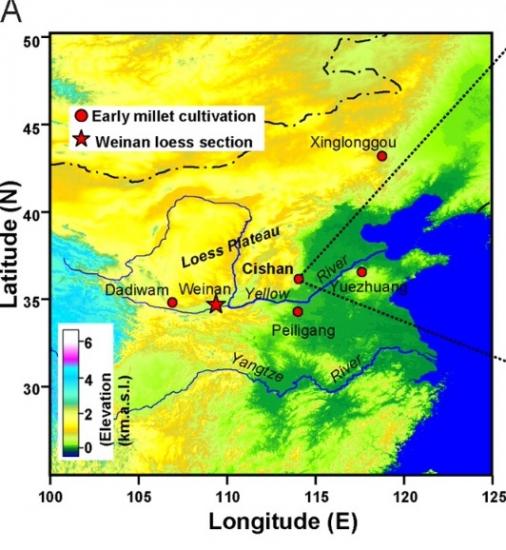 It was earlier established that China is at the primary center of the diversity of broomcorn millet cultivation (see C.W. Cowan et al., The Origins of Agriculture, p. 23; Zeven and Zhukovsky, 1975:32). A new study on the origins of millet domestication, could establish the routes of dispersal of millet cultivation/gathering, storage pit usage and associated tools to Japan, and thereby also shed some light on the possible origins of the incoming migrations of people during the Jomon or on early exchanges with the continent. Historical documents show that foxtail millet was an important crop during Zhou dynasty China, while the earliest foxtail millet sites are from Hunamni and Hohnamni Bronze Age sites in South Korea ( C.W. Cowan et al., The Origins of Agriculture, p. 25). All evidence points to millet plant domestication and cultivation in Japan earlier than the Late Jomon period, and certainly, by the end of the Late Jomon period in northeastern Japan (Gremillion, KJ, People, Plants, and Landscapes: Studies in Paleoethnobotany, pp 102-103)

Research analysis in “Earliest domestication of common millet (Panicum miliaceum) in East Asia extended to 10,000 years ago” concluded that

“the earliest significant common millet cultivation system was established in the semiarid regions of China by 10,000 cal yr BP, and that the relatively dry condition in the early Holocene may have been favorable for the domestication of common millet over foxtail millet. Our study shows that common millet appeared as a staple crop in northern China ≈10,000 years ago, suggesting that common millet might have been domesticated independently in this area and later spread to Russia, India, the Middle East, and Europe. Nevertheless, like Mesopotamia, where the spread of wheat and barley to the fertile floodplains of the Lower Tigris and Euphrates was a key factor in the emergence of civilization, the spread of common millet to the more productive regions of the Yellow River and its tributaries provided the essential food surplus that later permitted the development of social complexity in the Chinese civilization.”

The above study reported “the discovery of husk phytoliths and biomolecular components identifiable solely as common millet from newly excavated storage pits at the Neolithic Cishan site, China, dated to between ca. 10,300 and ca. 8,700 calibrated years before present (cal yr BP). After ca. 8,700 cal yr BP, the grain crops began to contain a small quantity of foxtail millet. Our research reveals that the common millet was the earliest dry farming crop in East Asia, which is probably attributed to its excellent resistance to drought.”

Foxtail millet (Setaria italica) and common millet (or broomcorn millet;Panicum miliaceum) were among the world’s most important and ancient domesticated crops. They were staple foods in the semiarid regions of East Asia (China, Japan, Russia, India, and Korea) and even in the entire Eurasian continent before the popularity of rice and wheat, and are still important foods in these regions today….

Thirty years ago, the world’s oldest millet remains, dating to ca. 8,200 calibrated years before present (cal yr BP), were discovered at the Early Neolithic site of Cishan, northern China. The site contained >50,000 kg of grain crops stored in the storage pits (7–9). Until now, the importance of these findings has been constrained by limited taxonomic identification with regard to whether they are from foxtail millet (S. italica) or common millet (P. miliaceum), because the early reported S. italica identifications are not all accepted (4,9–12). This article presents the phytoliths, biomolecular records, and new radiocarbon dating from newly excavated grain crop storage pits at the Cishan site. Large modern reference collections are used to compare and contrast microfossil morphology and biomolecular components in different millets and related grass species (13). The renewed investigations show that common millet agriculture arose independently in the semiarid regions of China by 10,000 cal yr BP. Our findings contribute to our knowledge of agricultural origins across the globe and have broader implications for understanding the development of human societies.

The Cishan site (36°34.511′ N, 114°06.720′ E) is located near the junction between the Loess Plateau and the North China Plain at an elevation of 260–270 m above sea level (Fig. 1). The archaeological site, containing a total of 88 storage pits with significant quantities (≈109 m3) of grain crop remains, was excavated from 1976 to 1978 (7, 8). Each storage pit included 0.3- to 2-m-thick grain crops, which were well preserved and found in situ in the 3- to 5-m-deep loess layer (9). All grain remains have been oxidized to ashes soon after they were exposed to air. Archaeological excavations also revealed the remains of houses and numerous millstones (Fig. S1), stone shovels, grind rollers, potteries, rich faunal remains, and plant assemblages including charred fruits of walnut (Juglans regia), hazel (Corylus heterophylla), and hackberry (Celtis bungeana) (7–9). Only 2 14C dates of charcoal from previously excavated H145 and H48 storage pits yielded uncalibrated ages of 7355 ± 100 yr BP and 7235 ± 105 yr BP, respectively (8). These remains represent the earliest evidence for the significant use of dry-farming crop plants in the human diet in East Asia. They also suggest that by this time agriculture had already been relatively well developed here.

According to archeobotanical research, the early charred grains of common millet occurred during the initial stages of various Early Neolithic sites (Fig. 1), including Dadiwan (ca. 7.8–7.35 cal kyr BP) (21), Xinglonggou (ca. 8.0–7.5 cal kyr BP) (22), and Yuezhuang (ca. 7.87 cal kyr BP) (23) in North China, but foxtail millet was barely present during these stages. Lee et al. (24) have speculated that the Early Neolithic predominance of broomcorn over foxtail millet at Xinglonggou and Yuezhuang ca. 6000 cal B.C. might be a regional phenomenon, implying that broomcorn millet might have been domesticated earlier than foxtail millet. Our analytical results of both phytoliths and biomolecular components have established that the earliest cereal remains stored in the Cishan Neolithic sites, during ca. 10,300–8,700 cal yr BP, are not foxtail millet, but only common millet. After 8,700 cal yr BP, the grain crops gradually contained 0.4–2.8% foxtail millet. Our study also suggests that common millet was used as a staple food significantly earlier than foxtail millet in northern China. It provides direct evidence to show that, by 10,000 cal yr BP, the early people in northern China had developed various methods of maintenance and multiplication of millet seeds for the next generation, and had known how to store crops of staple food in secure, dry places of storage pits during the Early Neolithic epoch.

Common millet has the lowest water requirement among all grain crops; it is also a relatively short-season crop, and could grow well in poor soils (5, 6, 25). The geographical distribution of both foxtail millet and common millet in China (Fig. S4) shows that foxtail millet is more common in the semiwet eastern areas, and its optimal growth occurs at mean annual temperature (MAT) from 8 to 10 °C and mean annual precipitation (MAP) from 450 to 550 mm. However, common millet is more adapted to the drier interior areas, and its optimal growing conditions occur at MAT from 6 to 8 °C and MAP from 350 to 450 mm (5,6). The origin and dispersal of millet agriculture is a key problem closely related to the history of human impact on the environment and transformation of natural vegetation.

Paleoenvironmental data from the Weinan section (26–29) (Fig. 1) in the southern part of the Loess Plateau between the Cishan and Dadiwan sites are crucial for understanding the early stage of the forager–cultivator transition. The early Holocene was a period of significant environmental change marked by dry climate conditions as inferred from sediment texture (26, 28), magnetic susceptibility (26, 28), pollen (27), phytoliths (28), and mollusk assemblages (29). These proxy records show an environmental transition from cold–dry (ca. 11,000–8,700 cal yr BP) to warm–wet (ca. 8,700–5,500 cal yr BP) conditions. Many lacustrine and loess records from the Chinese Loess Plateau to Central Asia also support the scenario of a dry climate during the early Holocene (30–34). Under the drier climate conditions, soil development was slowed, and the soil developed on the underlying older and coarser loess of the glacial period was poor in nutrients (28). This raises the possibility that common millet was more significant than foxtail millet in the early stages of food production in North China because it was more adaptable than foxtail millet to the dry condition prevailing during the early Holocene. The common millet cultivation may involve complex selection by natural forces and human activities, although no clear evidence has been documented in this region for the transitions from gathering to cultivation and/or from a wild ancestor to domesticated common millet.