A very well-preserved 33,000 year old canine skull from a cave in the Siberian Altai mountains shows some of the earliest evidence of dog domestication ever found. 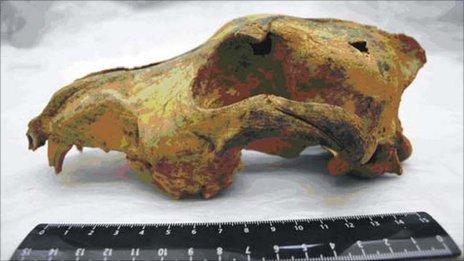 But the specimen raises doubts about early man's loyalty to his new best friend as times got tough.

The findings come from a Russian-led international team of archaeologists.

The skull, from shortly before the peak of the last ice age, is unlike those of modern dogs or wolves.

Although the snout is similar in size to early, fully domesticated Greenland dogs from 1,000 years ago, its large teeth resemble those of 31,000 year-old wild European wolves.

This indicates a dog in the very early stages of domestication, says evolutionary biologist Dr Susan Crockford, one of the authors on the study.

"The wolves were not deliberately domesticated, the process of making a wolf into a dog was a natural process," explained Dr Crockford of Pacific Identifications, Canada.

But for this to happen required settled early human populations: "At this time, people were hunting animals in large numbers and leaving large piles of bones behind, and that was attracting the wolves," she said.

The most curious, least fearful wolves tended to have more juvenile characteristics with shorter, wider snouts and smaller, more crowded teeth, features that, over generations, came to define the domesticated dog.

These early dogs would have been useful to people in cleaning up scraps and fending off other predators such as bears, but after the ice age, over the last 10,000 years, they became key members of the team, believes Oxford University archaeologist Professor Thomas Higham, a co-author on the study.

"When you've got hunting dogs, all of a sudden it's a game changer. Hunters with dogs are much better than sole hunters," he told BBC News.

Intriguingly though, this much older early Siberian dog seems to have hit an evolutionary dead end. While people continued to occupy the Altai through the depths of the last ice age, they seem to have done so without their dogs, perhaps as food became more scarce.

"What the ice age did was to cause people to move around more," said Dr Crockford, halting the process of domestication and setting wolves and people back into competition for perhaps 20,000 years.

Fortunately, the closest modern dog, the Siberian Samoyed bred to herd and guard reindeer, seems to have taken up where its ancient predecessor left off.

Virtually all well-documented remains of early domestic dog (Canis familiaris) come from the late Glacial and early Holocene periods (ca. 14,000–9000 calendar years ago, cal BP), with few putative dogs found prior to the Last Glacial Maximum (LGM, ca. 26,500–19,000 cal BP). The dearth of pre-LGM dog-like canids and incomplete state of their preservation has until now prevented an understanding of the morphological features of transitional forms between wild wolves and domesticated dogs in temporal perspective.

We describe the well-preserved remains of a dog-like canid from the Razboinichya Cave (Altai Mountains of southern Siberia). Because of the extraordinary preservation of the material, including skull, mandibles (both sides) and teeth, it was possible to conduct a complete morphological description and comparison with representative examples of pre-LGM wild wolves, modern wolves, prehistoric domesticated dogs, and early dog-like canids, using morphological criteria to distinguish between wolves and dogs. It was found that the Razboinichya Cave individual is most similar to fully domesticated dogs from Greenland (about 1000 years old), and unlike ancient and modern wolves, and putative dogs from Eliseevichi I site in central Russia. Direct AMS radiocarbon dating of the skull and mandible of the Razboinichya canid conducted in three independent laboratories resulted in highly compatible ages, with average value of ca. 33,000 cal BP.

The Razboinichya Cave specimen appears to be an incipient dog that did not give rise to late Glacial – early Holocene lineages and probably represents wolf domestication disrupted by the climatic and cultural changes associated with the LGM. The two earliest incipient dogs from Western Europe (Goyet, Belguim) and Siberia (Razboinichya), separated by thousands of kilometers, show that dog domestication was multiregional, and thus had no single place of origin (as some DNA data have suggested) and subsequent spread.