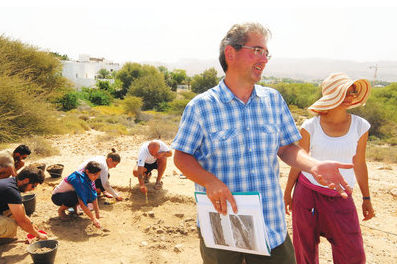 Archaeologists researching at Ras al Hamra (RH-6) in Qurm now have more reasons to believe that the site is in fact one of the oldest human settlements to be unearthed in the country.

Among the many new discoveries from the site are shell scrapers made from bivalves, several grooved stones, grave goods, a flint arrowhead and a soft-stone earring. Seven graves have also been unearthed at the site, with a proof of many more at the site.

Lapo Gianni Marcucci, head of the Italian archaeological team that worked on the site in the mangroves of Qurum Natural Reserve, told Muscat Daily in an e-mail reply from Paris, “Earrings of the type unearthed at the site have been found in large quantities at the site of RH-5 (another site close to RH-6) and in a few other coastal sites in northern Oman. But in the case of RH-6, the earring found could be the oldest of Oman, backdating the production by several hundred of years.”  He added that the village of RH-6 was probably occupied from the middle of the sixth millennium BC and the end of the fifth millennium BC.

“What is certain is that the site of RH-6 is unequivocally one of the oldest of Oman, if we now take into account the site of Wattayah destroyed in the 80s due to urban development.”

The findings of the ongoing research also questions the long held view that early humans in the region lived on the shores during winters and moved inwards during summer.

“One of the major debates among scholars is whether the Omani coastal villages dated to the early and middle Holocene were seasonal or sedentary. The sites of Ras al Hamra are located in a strategic place. The sea, the mangrove and inland territories through the Wadi Adai provided a great diversity of resources available throughout the year in a limited area surrounding the sites, and a continuous occupation on these large settlements could have been favoured,” said Marcucci.

Evidence from structural remains (huts with deep postholes), botanical and faunal remains (mainly locally available species) support this hypothesis, he added. “Furthermore, the presence of graveyards used over several generations indicate anchoring of groups on those sites. Finally, the material culture shows the development of craftsmanship activities within sites, to produce specific jewelleries and tools for local request.”

The research programme at RH-6 will soon offer the opportunity to explore this issue in detail through the study of structural remains, the micromorphological analysis of the deposit, the study of botanical and faunal remains, material culture, and geochemical analysis of human remains. “Thanks to the important stratigraphic sequence, we will soon know how lifestyles changed over time in Qurm area,” he said.

“The new graves found are also of great interest, as seven graves have now been excavated and there are indications of other potential burials. Presence of numerous large stones in limestone that generally indicate the covering of the graves allow us to confirm the presence of a graveyard also at RH-6. The graves will allow us to consider - in comparison with the data obtained from the nearby graveyard RH-5 - the evolution of funeral practices and living conditions during the time.” The study of all material gathered at RH-6 is being carried out in Paris at the Natural History Museum.