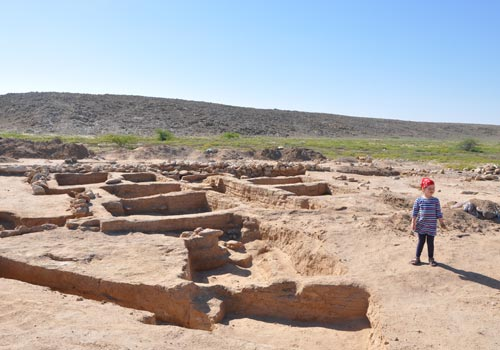 Studies on the impact of tsunamis and earthquakes on the coasts of Oman have identified signs of flood that took place in Ras Al Hadd about 4,500 years ago. Photos courtesy - Dr Goesta Hoffmann

Geologists from GUtech, in cooperation with archeologists from the Ministry of Heritage and Culture, have dug up evidence of a tsunami or severe storm that hit Ras Al Hadd about 4,500 years ago.

Speaking to the Times of Oman about the new research, Dr Goesta Hoffman, Associate Professor from the Applied Geosciences Department at GUtech, said there is evidence of major flooding at an archeological site in Ras Al Hadd, a village on the coast of Oman about 240km southeast of Muscat.

Dr Hoffmann and other researchers from GUtech and its affiliated university in Germany have done extensive studies on the impact of tsunamis, storm and earthquakes on the coasts of Oman. They focused on studying the rocks and soil, but they realised they could learn more by working with archeologists who are studying the remains of human settlements in Ras Al Hadd. The archeologists had identified signs that a flood took place approximately 4,500 years ago.

"We thought it would be quite good to collaborate with the archeologists. They introduced us to the site and when we came there we realised they already knew there were two settlement phases," Hoffmann explained.
The fact that there were two settlement phases, the first of which was marked by buildings made of sand brick, and the second by mud brick, suggests the village was destroyed at one point and rebuilt.

The remains date back to between 3,100 and 2,700 BC, and the evidence suggests they were built one after the other, meaning the people didn't leave the area despite having their homes heavily damaged by cyclone or tsunami.

The geologists looked at the land around the settlement where they also found evidence of flooding. There was charcoal in one of the layers of sediment, and shells with both halves still joined, untouched by humans.

"The wave must have washed over the village and there were open fire pits so the water carried this very floatable material and distributed the charcoal, together with sand," Hoffmann explained.

The presence of the shells with both halves still joined suggests they hadn't been eaten or used for any other purposed. Instead, they had been washed onto the shore by a wave and died on land.

Extreme event
The evidence isn't strong enough to determine whether the flooding in Ras Al Hadd 4,500 years back was from a tsunami or cyclone, like Gonu or Phet which hit Oman in recent years, or Nilofar, which came close to the coast last week, but there is no doubt the event was extreme.

To find out more precisely what kind of event it was, Dr Hoffmann says international collaboration with Pakistan and India would be required, since a tsunami that hit Oman would also have hit their coasts, leaving evidence there, too.

"We are now fostering the cooperation with Indian colleagues to see if they have similar inundation events at the same time on the coast of India. Then the conclusion could be derived," Dr Hoffman explained.  Regardless of whether it was a tsunami, cyclone or severe storm, Dr Hoffmann says the people must have been quite resilient, since they didn't move to a different location further inland. Similar parallels can made to modern day situations, in which communities rebuild in the same places following cyclones and tsunamis.

"In Oman they learned not to settle in wadis that got affected by Gonu, so things are improving, but there's a certain reason why people choose a certain area to live in, and basically this is the access to resources. The benefit is more than the negative side of it," he said.

In the case of Ras Al Hadd, the benefit is the proximity to fish, seafood and other edible marine creatures, such as turtles. People moved from the interior of Oman to the coastal areas due to climate changes that occurred about 6,000 years ago, Dr Hoffmann noted.

"When the climate got a bit worse in the interior and there was not that much rain, people gathered from all around and came to the coastline of Oman because this is a very nutrient-rich coast," he explained. Despite the risk of flooding along the coast, the people chose to stay there because of the food.

Rare events
"The extreme events are rare. They don't occur very often here. Probably, if at all, you would experience it once in a lifetime so it gets forgotten," said Dr Hoffmann.

More than half of Oman's population lives along the coast, so both the people and the infrastructure are vulnerable to flooding. The geo-archeological research along Oman's coast is important for predicting the effects of future events.

Prior to 1970 very little is documented in Oman so geological and archeological studies of the coast are of utmost importance. The research can reveal how often weather events with extreme waves occur, and how high the waves can be.

"We try to extend a record into the past to get a base for statistical analysis," Hoffmann said.

A paper about the findings, written by Hoffmann and his colleagues Christoph Grutzner, Klaus Reicherter and Frank Preusser, has been published in a prestigious science journal, the Quarternary Science Reviews.