The entrance to the Natufian-era burial cave.Photo by Dani Nadel

Cavemen in ancient Israel not only buried their dead with flowers – they also apparently had an advanced culture of plant use, not only for consumption but for ritual as well.

Skeletal remains from ~13,000 years ago found at Raqefet Cave, with indications of elaborate burial rituals. Photo by Dani Nadel

The earliest evidence of using flower beds for burial, some 13,700 years ago, was reported in Raqefet Cave in Mt. Carmel last summer. In four different graves from the Natufian period, dating back to 13,700 to 11,700 years ago, dozens of impressions of salvia and other mint species were found under human skeletons.

Now Prof. Dani Nadel from the University of Haifa and his colleagues argue that use of plants in the Raqefet cave was much wider than for just burial rituals. In an article published in the Journal of Anthropological Archaeology they describe how Carmel dwellers of that time processed grains and used plants in day to day living, based on phytoliths found in the cave. 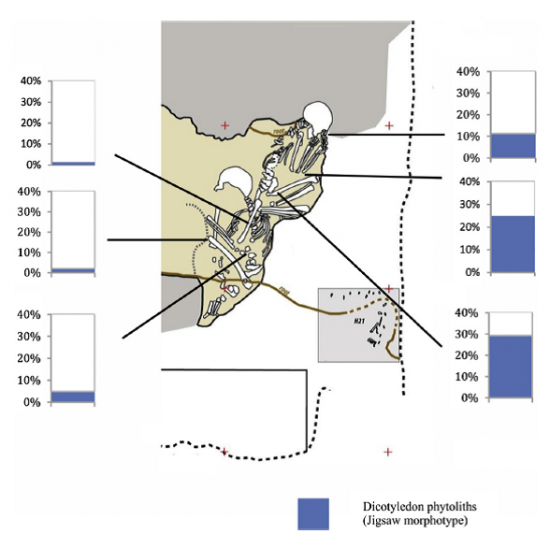 Jigsaw-puzzle phytoliths as a per cent of all phytoliths as the double burial of Homo 18 (top) and Homo 19 (bottom). - Photo: Dani Nadel

The Raqefet dwellers were part of the Natufian culture, which existed in the Middle East between15,000 and 11,500 years ago. (The Natufian culture is named for the Natuf creek 15 kilometers northeast of the Israeli city of Lod, which is the location in which their remains were first discovered.)

The Natufians are believed to be among the first humans to abandon nomadism and to settle in permanent locations. They were also among the first groups known to establish graveyards - defined spaces in which they buried their dead over generations. And where they evidently ate 'final suppers'.

Raqefet was a burial site: 29 skeletons of babies, children and adults were discovered inside the cave, in digs conducted between 2004 and 2011. The researchers also found about 100 installations carved into the bedrock, in different sizes and shapes – from tiny holes 2-5 centimeters wide to cupmarks, small bowls and mortars.

Some of these holes were used to make food, notably to grind or pound cereals, the scientists believe, based on phytoliths samples taken from the graves, from mortars and from other locations in and around the cave.

Phytoliths are rigid, microscopic siliceous particles formed by plants that continue to exist long after the plant decomposes. Their distinct morphologies enable scientists to identify the kinds of plants the cavemen used thousands of years ago.

The highest phytolith concentrations were found in sediments related to human activity, say Mr. Robert C. Power from the Max Planck Institute for Evolutionary Anthropology and Prof. Arlene M. Rosen from the Department of Anthropology at the University of Texas, Austin.

The highest phytolith concentrations were found in sediments related to human activity, say Mr. Robert C. Power from the Max Planck Institute for Evolutionary Anthropology and Prof. Arlene M. Rosen from the Department of Anthropology at the University of Texas, Austin.

The main plant category found in the cave was grasses. Like modern man, they evidently ate wheat and barley seeds, as well as smaller-seeded grasses not used today for consumption. Of course, the plant species that are the source of the phytoliths cannot always be clearly identified.

Of particular interest were phytoliths extracted from sediments near the abdomen of two of the humans buried in the cave. Nadel and his colleagues think they may represent a food offering to the dead, or their diet.

The small-seeded grasses could have been consumed in Raqefet cave, as an important food item: conceivably they were served as a final meal. This notion would be consistent with another finding from the same site, that the inhabitants of the Carmel held wakes with animal meat, especially gazelle, after burying their dead.

There were other symbolic acts in the cave, such as setting elongated stone slabs on edge near the head of the dead, and placing flat stones horizontally above several graves. With the flowers in some of the graves and the plant offerings to the dead, a more detailed picture of ritual and symbolic behavior regarding burials about 13,000 years ago is now emerging.