Rank and status among Neolithic children

There are some statuses that we are born into, they are innate to us. For example- we cannot control the status of the family that we are born into. If your parents are royalty, then you are born into being a royal. On the other hand, there is status that can be earned; so if we are born into a lower class family we can work hard and become part of the upper class under the right circumstances. Other earned statuses include becoming part of a varsity sports team or getting one’s PhD. When we are trying to interpret status and rank in the past, we need to address whether this status has been earned or is innate to the individual. The best way to tell this is to examine the children- if younger individuals have signs of higher status that they wouldn’t have been able to earn within their short lifespan, then we know that this particular status was innate. However, if individuals with signs of higher status are all adults, then we know that it must be earned over a lifetime. Thomas, Chambon and Murali (2011) examine the patterns of Neolithic mortuary practices in Northern France. The burial sites belong to the Cerny culture, which dates from 4600 to 4300 BCE. There are two primary types of burial sites. The first are the rather impressive barrows that vary in length from 25 to 200 meters. These monuments have clear cultural and visual impact. Very few individuals were buried within these barrows, suggesting that there was limited access to the mounds. It also indicates that the society was hierarchical since only select individuals could be buried in these locations. The majority of the population from this period are buried in flat cemeteries, where they were placed within large pits on their backs with their legs extended. Some burials from these flat cemeteries have evidence of coffins. 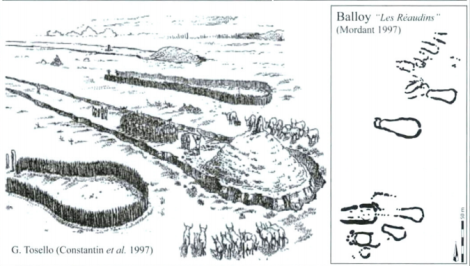 Reconstruction and plans of the Balloy barrows in Northern France, via Thomas, Chambon and Murali 2011

Despite the differences in location, the burials themselves both within mounds and within the flat cemeteries are quite similar- which causes Thomas, Chambon and Murali (2011) to question whether this truly is a hierarchical society and whether there is a difference in status between the barrow and flat cemetery. Early excavation and investigation of these two cemeteries suggested that only adults of acquired status were buried in the mounds. However, children have now been found within, suggesting instead that status was inherited. In order to understand these practices better,  Thomas, Chambon and Murali (2011) focus on studying the children of the Cerny culture. The sample included 39 sub-adult skeletons from the barrow type graves and 19 sub-adult skeletons from the flat cemeteries. Sub-adults are defined within this study as individuals under 20 years of age. No sex determination was done as this can be difficult within younger individuals. They were divided into five age groups: perinatal/infant, 1-4 years, 5-9 years, 10-14 years, 15-19 years. The two youngest groups, individuals 4 and under, were underrepresented and may reflect that they were given different treatment or their bones did not survive in the archaeological record. Both flat and barrow type cemeteries have a fairly good age representation, and individuals were treated similar to adults. Grave goods found within burials at both types of sites include flint tools, animal bone tools and objects, shell ornaments, stone ornaments, and ceramics. At both types of cemeteries there are very few grave goods, and no clear difference between them to argue that the barrows were more wealthy than the flat cemetery burials. Further, there is not a clear difference in certain types of grave goods going to certain age groups. They did find however that there was a clear connection within adults of certain males having hunting related tools- this pattern was seen in some of the sub-adults as well leading them to speculate the hunting was an exalted behavior for men- though not necessarily a status that was earned as it appears with children. 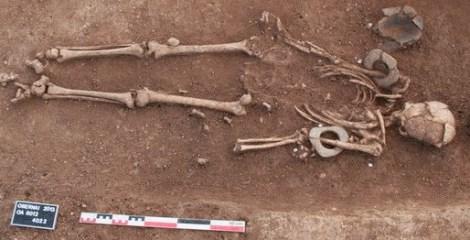 Based on the range of evidence, they note that burial within the barrows was obviously special as limited people were buried there- however this was not determined by age, sex, or acquired status. They argue that status and role (such as hunter) was associated with one’s familial line, not earned over one’s lifetime. Further, the only real difference between the two types of burial location is the construction of the monument- were it not for that, these would be considered part of the same treatment based on demographics and grave goods. Based on this- they argue that social identity alone may not have been the reason for burial in a mound, and it may not indicate a hierarchy. Their argument is quite interesting, and the fact that there is no difference between cemetery and barrow except the barrow itself is fascinating. Personally though, I would have loved to see a more expanded argument as to what other possible reasons for this variation in cemetery structures. Perhaps those buried in the mounds died in a different manner than those buried in the cemeteries, or maybe they had different spiritual beliefs in how one should be properly buried, maybe the lack of grave goods in the mounds was a way of masking differences in inherited rank. It seems like as this article ends they are hitting on the most interesting part- I wanted the discussion to go a little bit further! Works Cited Thomas, Chambon and Murali. 2011. Unpacking burial and rank: the role of children in the first monumental cemeteries of Western Europe (4600-4300 BC). Antiquity (85) 329: 772-786.