Two rooms were discovered along with a mosaic fountain and a network of pipes connected to a cistern. 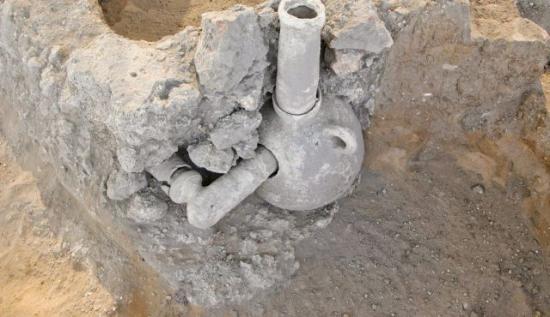 The remnants of the fountain Photo by Photo by Assaf Peretz, courtesy of the Israel Antiquities Authority

During an excavation at a site where a bridge will shortly be constructed, an ancient estate was found in the city of Ramla in central Israel.

“It seems that a private building belonging to a wealthy family was located there and that the fountain was used for ornamentation,” Hagit Torgë, excavation director on behalf of the Israel Antiquities Authority, said in a statement obtained by LiveScience. “This is the first time that a fountain has been discovered outside the known, more affluent quarters of Old Ramla.”

Two rooms were discovered along with a mosaic fountain and a network of pipes connected to a cistern. The fountain is in an excellent state of preservation.

Experts believe that the estate is from a wealthy family and can be dated to Fatimid period, which encompasses the late 10th century to the first half of the 11th century, The Daily Mail reports. This is the first time that a fountain and pipe system from that time period has been discovered intact; all the others that archeologists have previously unearthed have been damaged or destroyed by two major earthquakes in the area, one in 1033 and the other in 1068. Archaeologists believe that the area was abandoned in the mid-11th century after a major earthquake.

Ramla was an important economic center of Israel due to its location on the road from Cairo to Damascus and from Yafo to Jerusalem. However, this estate was found outside the area where archeologists believe that most wealthy families of the time resided. Other familial artifacts, including a baby rattle, were found at the site, indicating that the house was inhabited at some point in time. Excavations continue to determine the full extent of the pipe system and remove some objects for preservation and conservation. After excavations are complete, the fountain and other important items from the site will be displayed at the Pool of the Arches compound. The Israel Antiquities Authority oversaw the excavations, and shares that Ramla was even more important than the perhaps more well-known city of Jerusalem at some points in the country’s history.

The discovery of a wealthy estate, and in particular, of an intact pipe system allows archeologists and historical researchers to understand more about the lives of the people living in Ramla during the Fatimid period. In particular, the pipes will be studied to understand the use of water during the time period as they are the first intact example that researchers have been able to examine.