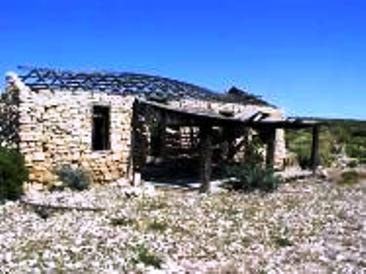 The photo of the Rain Springs rock ranch house was taken several years ago when it was still...

In the early 1920s, Floyd and Mary Thomas Rupert came to New Mexico. They settled at a ranch site about 20 miles west of Carlsbad called Rain Springs. The couple had a son, Neil, and a daughter, Mildred. According to their grandson Ken Groves, his grandfather, Floyd Rupert, and father, Gilbert Groves, built the rock ranch house and other structures on land that is currently owned by another private individual.

Groves' great-grandfather, Leander Thomas, came to the area around 1906 and first homesteaded at Dayton. He later lived in what Groves referred to as a shack on the top of the hill at the Rain Springs site.

According to file notes of the late Bill Balgemann at the Family History Center, a documented conversation with Neil Rupert stated the family moved to town (Carlsbad) in 1937 and leased the ranch to Raymond Lewis.

Shortly thereafter, Neil Rupert helped R.M.P. "Bill" Burnet, self-taught amateur archaeologist and paleontologist and one of the founders of the Carlsbad Museum, excavate the Indian camp located at the ranch site.

Burnet had previously worked with Edgar B. Howard, a degreed anthropologist lacking archaeology field work, on his Southwest early man project focusing on the Guadalupe Mountains foothills and canyons. The project was partly funded by the University of Pennsylvania Museum of Archaeology and Anthropology and the Academy of Natural Sciences in Philadelphia beginning in the late 1920s into the early 1930s.

Howard's interest in portions of Guadalupe Mountains was fueled by accounts of explorations by Carl B. Livingston, a Carlsbad native from a prominent cattle-ranching family. Livingston searched the area canyons for prehistoric sites in the early 1920s and discovered several Basket Maker human burials in dry caves along with other well-preserved artifacts.

The Rain Springs ranch site was a prehistoric ring midden (also referred to as mescal pit) site situated in front of a shallow rock shelter. This site consists of 13 features, including the remains of six large roasting pits and seven hearths.

"The Rain Springs Ranch excavation was completed by Bill Burnet," Owens said. "I wrote up something about it for the museum's display on Bill Burnet a few years back, along with helping identify some photos and museum collection items from the excavation."

"As far as I know and from what I remember, very little was formally written about the actual excavation. I never ran across any sort of status report," she added.

It was Chaille Gray, son of the ranch operator, who discovered human remains while enlarging a rich soil garden in one of the ring middens. Neil O. McKim wrote an article in the Eddy County News dated May 5, 1939, about the human remains discovery at the ranch site.

"One day last winter in company with Raymond Lewis, Gray started to dig into the rich, black soil. But with almost the first shovel of earth turned, he discovered that the watermelon vine had entwined its roots among the bones of a human skeleton," McKim wrote.

Gray sent word to Burnet about what he had unearthed. Because intact human remains were rare in association with ring middens, Burnet's excitement heightened.

Burnet began excavating what was believed to be the entire site with the help of Grey, Lewis, James Burnet and McKim. The remains of at least nine individuals, juveniles and adults of both genders, were recovered within and adjacent to the ring midden. In addition to the human remains, there were broken ceramic vessels, stone and bone tools and animal remains.

The direct association between the ceramic vessels and human remains and their burial within the ring midden, supposedly led Burnet to the personal conclusion that he had discovered an undocumented race of people referred to as Mescal Pit Man.

Burnet addressed a meeting of the Southwestern Division of the American Association for the Advancement of Science in 1939. During that address he said, "The history of the Mescal Pit Man will close a gap of about 500 years in the history of prehistoric man who have (sic) inhabited the Carlsbad region."

The technology of radiocarbon dating that would provide an absolute date or dates for the use of the ring midden and rock shelter, was not available at the time the site was excavated. Because no final report from Burnet's field notes and maps can be located, his Mescal Pit Man theory is just that — his theory.

"This leaves a researcher with only the known artifact assemblage and a few newspaper and personal accounts from which to draw our conclusions," Owens said noting, Burnet's notes and maps could have assisted with further site interpretation.

According to Carlsbad Museum and Art Center records, three ceramic pots and three ceramic bowls were recovered during the excavation. Two of the pots, identified as Jornada brown ware, and one bowl were known to be reconstructed.

Jornada brown ware, a locally-produced utilitarian ware, was manufactured in the southeastern part of the state from approximately A.D. 200/400 (currently accepted date) until A.D. 1350. Based on the vessels morphology or shape and lack of burn marks from cooking, the pots were likely used for storage, Owens explained.

She added that the pointed bottom on one of the pots is a trademark shape of storage vessels in North America that is common among Athabaskan groups such as the Navajo and Apache.

Because of Burnet's work there is a better understanding of when ring middens were constructed as well as their various functions.

Burnet was hailed by many for his ability to keep artifacts within the community. This was no small feat because the popular time period trend was for artifacts to be sent back east as museum prizes.

"Though much of the written record of the Rain Springs ranch excavation has been lost, the majority of the artifacts recovered from the site are still curated with the Carlsbad Museum and Art Center and are available for future study and research," said Owens.

Although some of Burnet's conclusions are no longer valid, some will continue to question. Was there a mystery race of people or was this ring midden site a convenient place to bury those who died in the vicinity during this time period?

An article dated July 1933 titled "Antiquity of Man in the Pecos Valley of New Mexico," by R.M.P. "Bill Burnet