Racton (G-B): Bronze Age skeleton of dagger-clutching Man could have been a King or priest buried

Amy Roberts, the Collections Officer at the Novium in Chichester, introduces the Bronze Age Racton Man who could have national importance 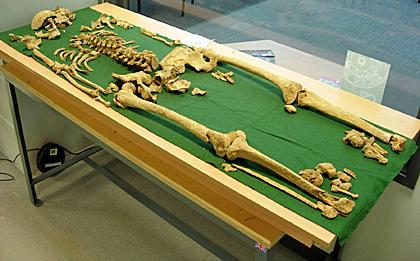 "It’s a complete skeleton, and it was found in a crouched position. The dagger was found, I believe, in his right hand.

There’s some staining to the bones themselves, so we can tell that they were probably holding the dagger up at the time, in their chest sort of area.

We are calling him the Mystery Man because we’re waiting for all this analysis to try and find out more about him.

It was actually discovered in 1989. A metal detectorist found the dagger and the jawbone, but because of the lack of resources at the time no further analysis was really undertaken.

Features of the dagger could mean it represents the transitional phase from the Copper Age to the Early Bronze Age, between 2,200 and 2,100 BC© Courtesy The Novium

There was an excavation of the site which discovered further rivets and the rest of the skeletal remains – the rest of the human himself. But other than that, very little has been found out about him.

There was an initial report in a local journal but no real publication of information. We don’t know whether it’s a he or a she at the moment.

We think it may be a man because they – I keep saying he, sorry, it’s a force of habit – have quite long longbones.

You would think he would be quite a high-status individual. You don’t get many finds of this sort of nature.

Our archaeology collection is kept at Fishbourne Roman Palace in our Collections Discovery Centre. It’s a joint store between the Novium and Fishbourne.

The bones have been kept there since it opened in 2007, and prior to that it was in storage in Chichester.

James Kenny [Chichester District Council's Archaeology Officer] spoke to a Bronze Age specialist about the find and he became quite interested in it, which is how the whole project came about, really.

That was maybe about a year and a half ago. We’ve been sourcing the funding in the meantime.

We applied to the South Down National Park Authority’s Sustainable Communities Fund and got a grant of £1,980. What we’re using the majority of that money for is the isotopic analysis and the carbon dating, at the National Museum of Scotland, and also the osteological analysis of the remains themselves.

We’ll have a specialist come down and look at the remains for that. He came and had an initial look – we needed to do initial cleaning as the remains had not been cleaned post-excavation, so there was still quite a lot of excess dirt on the bones, so it was very difficult for him to know what he was looking at because he couldn’t see if there was any trauma or pathology or anything like that on the bones themselves.

That was the first stage of the project which, over the next few days, should be completed, allowing him to come and have a look at the bones.

We’ve been guided by him as to cleaning the bones in the best possible way. They are quite fragile because they’re 4,000-odd years old.

The project will culminate in an exhibition in September, so all the report-writing and research will have to be done before that time.

We have a foyer area where we’ll be displaying them in a case as they were found – in a crouched position with the dagger close by. That will be done by the osteologist, because it’s quite a tricky thing to have him laid out in the right sort of position.

There are further remains in the collection: we have a big archive of Anglo-Saxon remains. We have other sites that are cremation burials as well.

It’s not just about funding – the types of investigations you can do have changed. Isotopic analysis wasn’t available when they were found, so we can gain further analysis now that we would not have been able to get at the time.” 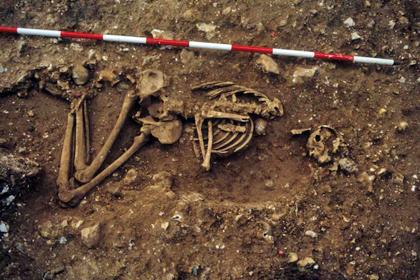 Racton Man when he was discovered on farmland near Westbourne, outside Chichester© Courtesy The Novium 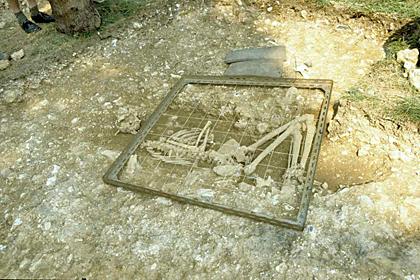