A team of archaeologists and engineers from the University of California, San Diego have returned from a field expedition to Quintana Roo, Mexico, where they digitally documented two at-risk archaeological sites - a 16th century church and an ancient Maya cave shrine -- using a high-tech laser scanner.

The expedition was sponsored by the Center of Interdisciplinary Science for Art, Architecture and Archaeology (CISA3) at the UC San Diego Qualcomm Institute, in cooperation with Mexico’s Instituto Nacional de Antropología e Historia (INAH).

Dominique Rissolo, a visiting scholar in archaeology who led the team, says the expedition is the first step in furthering the “tremendous potential to contribute to the digital preservation of the sites, as well as a long-term conservation plan.”

“The data will be processed, prepared, and presented to INAH,” adds Rissolo. “The results of these efforts will form the foundation for a long-term conservation plan for the sites, which will likely include a number of specific interventions to stabilize and protect the structures.”

The researchers collected data at the sites using a LiDAR scanner, which creates a high-resolution 3D image by illuminating a target with an infrared laser, measuring distance down to the millimeter and analyzing the reflected light. Researchers at CISA3 have documented a number of at-risk archaeological sites with LiDAR, which provides a non-destructive means of documenting historical structures with the goal of better understanding and/or preserving them. 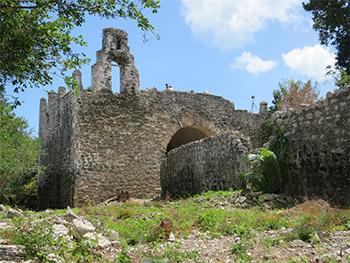 UC San Diego researchers are hoping to collaborate with Mexico on a conservation plan to preserve what is thought to be the first Catholic Church in Latin America.

The team took a two-hour boat ride to get to the church, which is located in an area called Boca Iglesias that rests on the ancient Maya site of Ecab. Conquistador Francisco Hernández de Córdoba landed at the site in 1517 and renamed it “Gran Cairo.” Sometime in the 1530s, Spaniards partially razed the site to build the church, which is thought to be the first Catholic Church in Latin America.

The church bore witness to a number of interesting events throughout Mexico’s colonial history, including an attack by the French pirate Pierre Sanfroy in 1571. The church and the curate’s house today lie half-ruined in a remote and completely empty corner of the Yucatan Peninsula. The ruins managed to survive centuries of hurricanes, including Wilma, but are in a precarious state.

To get to their second site -- a miniature temple (or shrine) inside a cave near the east coast of Quintana Roo – the team had to take a 40-minute off-road adventure in the back of a pickup truck and another 30-minute hike through the jungle with a machete-wielding guide who hacked through the overgrown vegetation. The team found the shrine to be remarkably intact.

Rissolo says that most such shrines are demolished or damaged by local residents “who believe – erroneously – that ‘treasure’ is hidden beneath.”

“Archaeologists have been racing to record these shrines for over 10 years, as regional development has led to new discoveries. This shrine is perhaps the best preserved in all of the northern Maya lowlands and should be laser scanned before it is impacted. Nothing like this has been attempted in the region and would assist INAH in their local conservation efforts.

The team spent four days collecting just shy of a billion data points at the two sites. Although the LiDAR scanner can scan in 360 degrees, capturing the interior and exterior of the church required about 30 full scans to account for ‘laser shadows’ – the shadows cast by the LiDAR machine itself. The church also had to be cleared of the trees that had grown around it and on its roof.

CISA3’s Michael Hess, a second year Ph.D. student in structural engineering, was responsible for setting up the scanner in the church’s Baptistery and Sacristy – two vaulted spaces that were filled with bats and a lot of guano.

“I basically just walked in really low, placed the scanner down, set it, and ran,” says Hess.

Rissolo and Hess were joined by CISA3’s Aliya Hoff, a graduating senior in the Department of Anthropology, and Dominique Meyer, a first year engineering student. Also collaborating with the team were Jeffrey B. Glover of Georgia State University. Glover is co-director with Rissolo on the Proyecto Costa Escondida, which has been conducting investigations along the north coast of Quintana Roo since 2006. Fabio Esteban Amador, an archaeologist and science communicator with the National Geographic Society, was also on site. He has been working in Quintana Roo since 1996. Fred Devos, a prolific cave explorer and surveyor with Global Underwater Explorers, joined the team for the cave scan. At the church site, the team worked closely with INAH archaeologists Adriana Velázquez Morlet, Luis Leira, Enrique Terrones, and Sandra Elizalde.

Rissolo notes that both sites are “wonderful, high-profile candidates for laser scanning, imaging with the Qualcomm Institute’s 3D CaveCam, and structure-from-motion (SfM) imaging.” The church is also a candidate for thermal imaging. Rissolo adds that the team will continue to work closely with INAH as their conservation plans and priorities are formalized, and their work at the cave will also contribute to a manuscript about Post-Classic cave shrines (which will be submitted to an academic journal).