The corpus delicti is a plain flacon from among the possessions of Pharaoh Hatshepsut, who lived around 1450 B.C., which is on exhibit in the permanent collection of the Egyptian Museum of the University of Bonn. For three and a half millennia, the vessel may have held a deadly secret. This is what the Head of the collection, Michael Höveler-Müller and Dr. Helmut Wiedenfeld from the university's Pharmacology Institute just discovered. After two years of research it is now clear that the flacon did not hold a perfume; instead, it was a kind of skin care lotion or even medication for a monarch suffering from eczema. In addition, the pharmacologists found a strongly carcinogenic substance. Was Hatshepsut killed by her medicine? 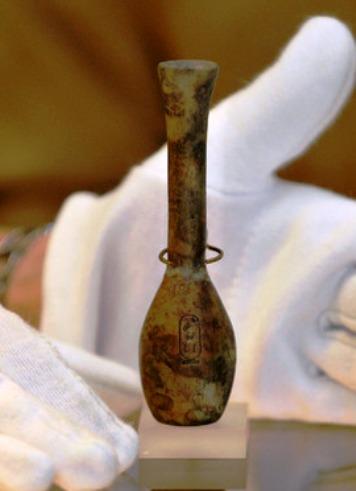 When Michael Höveler-Müller became the curator of the Egyptian Museum of the University of Bonn in 2009, it occurred to him to examine the interior of the vessel that, according to an inscription, belonged to Pharaoh Hatshepsut. Its neck had been blocked with what was generally considered "dirt," but Höveler-Müller suspected that it might also be the original clay stopper. So possibly, some of the original contents might still be inside. In Dr. Helmut Wiedenfeld from the Pharmacy Institute, he found just the right partner, to get to the bottom of this question and of the flacon.

At the Radiology Clinic of the Bonn Universitätsklinikum, the flacon was subjected to a CAT scan. Here, the Egyptologist's suspicion was confirmed – not only was the closure intact, but the vessel also held residue of a dried-up liquid. In the summer of 2009, Professor Dr. Friedrich Bootz from the Klinik und Poliklinik für Hals-, Nasen- und Ohrenheilkunde (laryngology, rhinology and otology) of the University of Bonn took samples, using an endoscope.

Too greasy for perfume

This allowed Dr. Wiedenfeld and his team to analyze the old substances for their ingredients. And it became obvious very quickly that what they had found was not dried-up perfume. The mix contained large amounts of palm oil and nutmeg apple oil. "I didn't think anybody would put so much grease on her face," said Dr. Wiedenfeld. "That would make her look as greasy as a plate of ribs." Two additional components clued the pharmacologist in to the actual purpose of the mix, "We found a lot of unsaturated fatty acids that provide relief for people with skin diseases." And this is where the Egyptologist was able to add another piece of the puzzle, "It is indeed known that there were cases of skin disease in Hatshepsut's family." Inflammatory skin diseases such as psoriasis have a largely genetic component.

And the third group of ingredients also points to the fact that this substance was not about providing a nice fragrance, but instead, for fighting a big itch – the pharmacologists found a lot of hydrocarbons derived from creosote and asphalt. To this day, creams containing creosote are used to treat chronic skin diseases. Due to the potentially carcinogenic effects of some of its ingredients, creosote has meanwhile been banned from cosmetics completely, and medications containing creosote are now prescription-only.

What the pharmacologists detected in Hatshepsut's little bottle was in particular benzo(a)pyrene, a hazardous aromatic hydrocarbon consisting of several carbon rings. "Benzo(a)pyrene is one of the most dangerous carcinogenic substances we know," explained Dr. Wiedenfeld. For example, the risk of contracting lung cancer from cigarette smoke results essentially from this substance.

Did the lotion cause the Pharaoh's death from cancer?

Did Hatshepsut maybe poison herself without knowing it? "There is a lot that speaks for this hypothesis," Dr. Wiedenfeld said. "If you imagine that the Queen had a chronic skin disease and that she found short-term improvement from the salve, she may have exposed herself to a great risk over the years." The Egyptologist also thinks that this is very likely. "We have known for a long time that Hatshepsut had cancer and maybe even died from it," said Michael Höveler-Müller. "We may now know the actual cause."

But at this point, the Bonn scientists can only surmise how Hatshepsut obtained her lotion. "Egyptian physicians were general practitioners and good surgeons, but they were lousy internists," explained Dr. Wiedenfeld. "It is quite possible that they owe their knowledge of certain medications to their contacts with Persia and India where the healing arts were very advanced even in Antiquity."