Institute of Vertebrate Palaeontology and Palaeoanthropology 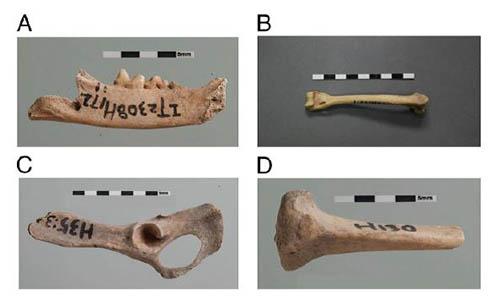 Domestic cats are one of the most popular pets worldwide, but little is known about their domestication. In a study published December 16, 2013 in PNAS, Dr. HU Yaowu, Key Laboratory of Vertebrate Evolution and Human Origins of Chinese Academy of Sciences, and Institute of Vertebrate Palaeontology and Palaeoanthropology (IVPP), and his collaborators reported on the presence of cats directly dated about 5300 years ago in the early agricultural village of Quanhucun in Shaanxi, China. This study offers fresh perspectives on cat domestication, providing the earliest known evidence for commensal relationships between people and cats.

Cat remains rarely are found in ancient archaeological sites, and little is known about how they were domesticated. Cats were thought to have first been domesticated in ancient Egypt, where they were kept some 4,000 years ago, but more recent research suggests close relations with humans may have occurred much earlier, including the discovery of a wild cat buried with a human about 9,500 years ago in Cyprus. Evidence is lacking from the key period of cat domestication 9,500–4,000 years ago.

The site of Quanhucun (N 34°32′53″, E 109°51′40″) is located at the village of Quanhucun, Hua County, Shaanxi Province, China. According to typological analysis of pottery, most archaeological features date to the Middle-Late Yangshao Culture (6000∼5000 years ago) with three cultural phases. The Yangshao Culture (7000∼5000 years ago) is one of the best known cultures of the Chinese Neolithic and mainly distributed within the territory of Shaanxi, Shanxi, and Henan Provinces. Yangshao villages were comprised of houses, cemeteries, and settlements that were often used by large groups of people for long periods. Foxtail millet (Setaria italica) and common millet (Panicum miliaceum) were cultivated and domestic pigs (Sus scrofa) and dogs (Canis familiaris) were kept.

Cat remains from the Quanhucun site were outside the wild range of Near Eastern wildcats and biometrically smaller, but within the size-range of domestic cats. Carbon isotopes indicate that rodents, domestic dogs and pigs from the ancient village were eating millet, but deer were not. Carbon and nitrogen isotopes show that cats were preying on animals that lived on farmed millet, probably rodents. At the same time, an ancient rodent burrow into a storage pit and the rodent-proof design of grain storage pots indicate that farmers had problems with rodents in the grain stores.

Isotopic data also show that one cat ate less meat and consumed more millet-based foods than expected, indicating that it scavenged among or was fed by people. Taken together, isotopic and archaeological data demonstrate that cats were advantageous for ancient farmers.

"Our data suggest that rodent threats to stored grain, indicating cats were advantageous to farmers, whereas food in villages was attractive to cats. These findings provide evidence for commensal processes of cat domestication”, said Dr. HU Yaowu, lead author of the study.

Currently, there is no DNA evidence to show whether the cats found at Quanhucun are descendants of the Near Eastern Wildcat, a subspecies not native to the area.“We do not yet know whether these cats came to China from the Near East, whether they interbred with Chinese wild-cat species, or even whether cats from China played a previously unsuspected role in domestication,” said study coauthor Dr. Fiona B. Marshall, Anthropology Department of Washington University in St. Louis.