Pieces from a mysterious board game that hasn't been played for 1,500 years were discovered in a heavily looted 2,300-year-old tomb near Qingzhou City in China.

There, archaeologists found a 14-face die made of animal tooth, 21 rectangular game pieces with numbers painted on them and a broken tile which was once part of a game board. 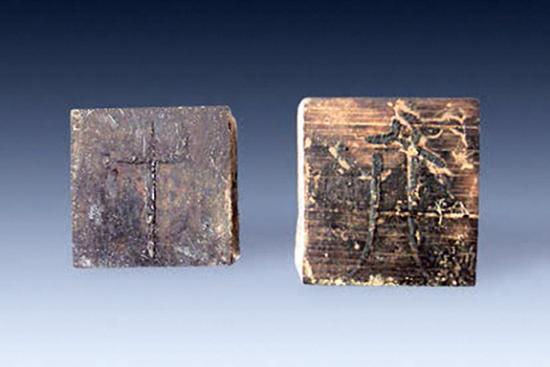 Twenty-one game pieces were found near the dice. They have numbers painted on them. Two of the pieces are shown here. (Image courtesy Chinese Cultural Relics.)

The tile when reconstructed was "decorated with two eyes, which are surrounded by cloud-and-thunder patterns," wrote the archaeologists in a report published recently in the journal Chinese Cultural Relics.

A reconstruction of the broken game tile that was found near the dice and game pieces. Archaeologists say that the tile is decorated with "two eyes, which are surrounded by cloud-and-thunder patterns." (Image courtesy Chinese Cultural Relics.)

The skeleton of possibly one of the grave robbers was also discovered in a shaft made within the tomb by looters. [See Photos of the Ancient Tomb and Board Game Pieces]

Twelve faces of the die are numbered 1 through 6 in a form of ancient Chinese writing known as "seal script." Each number appears twice on the die while two faces were left blank, the researchers noted.

The artifacts seem to be part of a game called "bo," sometimes referred to as "liubo" the archaeologists said. Researchers who have studied the game of bo are uncertain exactly how it was played. People stopped playing it around 1,500 years ago and the rules may have changed during the time that it was played.

However, a poem written about 2,200 years ago by a man named Song Yu gives an idea as to what the game was like:

"Then, with bamboo dice and ivory pieces, the game of Liu Bo is begun; sides are taken; they advance together; keenly they threaten each other. Pieces are kinged, and the scoring doubled. Shouts of 'five white!' arise" (translation by David Hawkes).

The tomb itself has two large ramps that lead to a staircase descending into the burial chamber. Five pits holding grave goods for the deceased are located beside the tomb. In ancient times, the tomb — which is about 330 feet (100 meters) long — was covered with a burial mound (now destroyed). 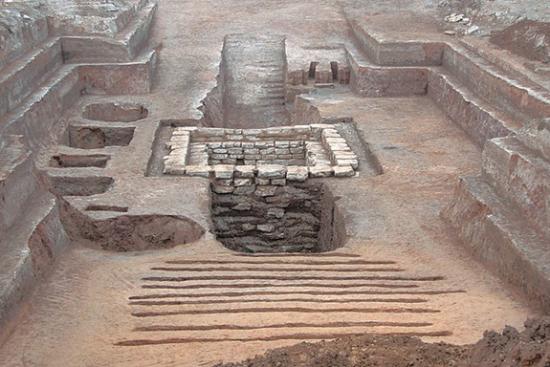 At the time the tomb was built, China was divided into several states that often fought against each other. Archaeologists believe that this tomb was built to bury aristocrats from the state of Qi.

"Despite the huge scale of the tomb, it has been thoroughly robbed," the archaeologists wrote. "The coffin chamber was almost completely dug out and robbed, suffering severe damage in the process."

Archaeologists found 26 shafts dug into the tomb by looters. One of the shafts "yielded a curled-up human skeleton, which might be the remains of one of the tomb robbers," wrote the archaeologists, who said they don't know when this person died, why he or she was buried in the looting shaft, or the person's age or sex.

During the third century B.C., a state called Qin, ruled by a man named Qin Shi Huangdi, gradually conquered the other states, including the state of Qi.

Qi itself survived until 221 B.C., when Qin Shi Huangdi conquered it, unifying all of China and becoming the country's first emperor. Qin Shi Huangdi then began construction of his own tomb, which was guarded by a terracotta army.

The tomb near Qingzhou city was excavated in 2004 by archaeologists from the Qingzhou Municipal Museum and Shandong Provincial Institute of Cultural Relics and Archaeology. The finds were first reported in Chinese in 2014 in the journal Wenwu. Recently, the Wenwu article was translated into English and published in the journal Chinese Cultural Relics.