Qianjiaping (Chine): Stratigraphy can be divided into six layers

The Qianjiaping site is located at an elliptical downland area in the left portion of Chunlingjiang River, a tributary of Xiangjiang River, which is and belonged to the first river terrace. A rescue excavation was conducted in November 2011 by the Hunan Provincial Institute of Archaeology. After the initial assessment, the site range measured around 300m from North to South, 60m from East to North with an approximate area of 20,000 sq meters. The excavation was focused on the northern part of the site and the twenty-three 5*5m squares were allocated around the damaged “soil-picking ditch”.

Stratigraphy can be divided into six layers. The second layer contained Ming and Qing dynasties deposits, while the third layer has deposit dated to Shang dynasty and deposit of Neolithic period were identified in layers four to six. Deposits from Neolithic period can be separated into Early and Late periods. Furthermore, 8 house foundations, 44 ash pits and 54 burials were identified in this excavation. 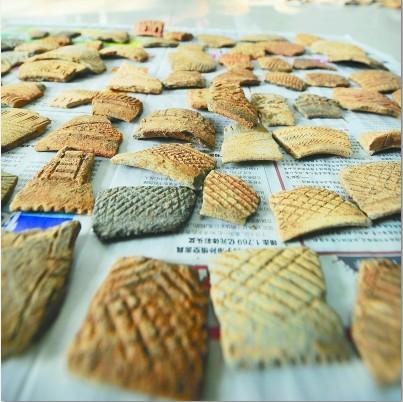 Features from Shang dynasty include house foundations, ash pits and burials, etc. Among the six house foundations, no base groove and wall can be identified. All of them were classified as the ground surface features with three different categories. The first one has no living surface, but contained numerous postholes and regarded as piled-dwelling. The second one has lifted living surface, which was a floor paved with large amount of grit and yellowish brown clay. The last one has a living surface covered by burnt red clay with pillars on top for a shed. For the 15 ash pits, most of them were filled with grayish black soil with slanted bottom, and few materials can be retrieved. The 49 burials were the main features of this excavation. The burials densely distributed with stratigraphic relationship of overlying or broken with each other. There are two type of burial form, extended burial and flexed burial, faced to either south or west, with individual burial such as M20 faced east. Most of them were adult burials and a few were teenage or even fewer infants burials. For the former, most of them with their heads faced north in extended style. Grave goods in these adult burials include pottery and stone tools. Among them, there is a joint burial with a couple and the skull of the male was placed to the left side of the burial. For the teenage and infant burials, most of them have their heads faced west in flexed style and no grave goods were discovered. Moreover, a special burial (M20) was discovered and it belonged to a female around the age of 18 to 23 with her head facing east. Four male skulls and several potteries were identified in this burial. For the placement of the skull, with the exception on a skull that was placed near the left hand side of the burial’s owner facing side, the rest have the craniums toward down with occipital bones toward up. Such burial custom is unusual and further study is required to conclude whether it is related to “headhunting” custom.

Artifacts from Shang Dynasty mainly include pottery and stone. For the pottery, most of them were red coarse ware with a few rough and fragile clay potteries. Most of them were decorated with corded pattern and the main types are round-bottom and ringed-foot ware. No flat-bottom and tripod wares can be identified. Pottery including rounded bottom fu, pot with ringed-foot, gui vessel, cup, pot, container in vase style, spindle wheel and etc. Copious amount of stone tools were identified with various styles including arrowhead, bow shaped adze, double shouldered stone tools and small amount of axe, spade, chisel and rings were also discovered.

Features dated to Neolithic period were the major discovery of the Qianjiaping site. Most of them were pit features (29 in number) and small amount of house foundations and burials together with ditch (not fully excavated) were also identified. Five extended adult burials with their head facing west were discovered. Moreover, individual burial (M52) facing south with few potteries was identified. No stone tools and other grave goods were retrieved. Other than that, two house foundations were identified with burnt red or yellowish soil for leveling up the floor. A small amount of postholes and burnt hard floor surface were discovered in various locations. Analysis of the materials within the pit shaped feature appears the different function of these pits. Unearthed artifacts include complete white pottery basin with ringed-foot, large quantity of animal remains, near complete animal bone and pottery. Pits in bag shaped with regular wall and smooth bottom were discovered, which filled with charcoal debris and gravels, burnt red clay, complete potteries at the bottom. 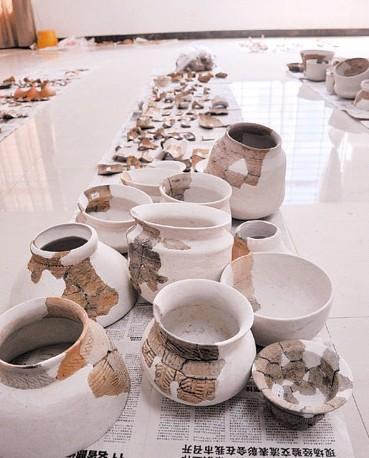 Copious amount of artifacts dated to Neolithic period was unearthed with different materials such as pottery, stone and bone which presented two major characters. 1. Decorated in decent pattern and most of them were white pottery and pottery with white coating. 2. Abundant amount of animal remains was even higher than pottery after initial statistical assessment.

Relatively few Neolithic artifacts were unearthed. Most of the potteries were red pottery or reddish brown pottery and some of them were with red coating, mixed with charcoal and sand. Patterns include incised and corded pattern, while some of them were plain. The types of containers include jar, large basin, pot stand and a few numbers of pottery handle and tripod ware. On the other hand, small amount of stone tools were discovered. Most of them were small chipped stone tools. But there were a few large polished stone axes. A small amount of animal remains were identified in this layer deposit, but the quantity was not as rich comparing to the later period. 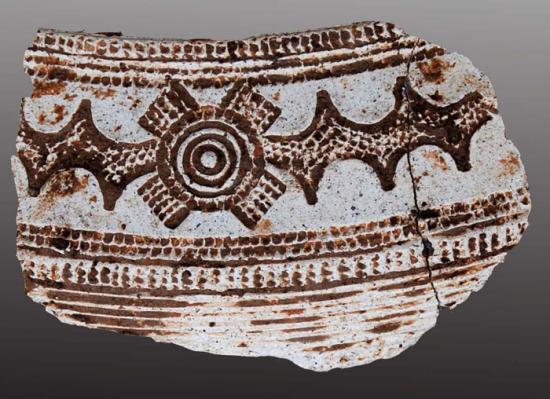 Various artifacts from late Neolithic period were unearthed. For the pottery, it can be divided into red and white colour. The former was mostly coarse sandy pottery and the latter was mostly clay pottery. The decorations of these potteries were complicated, with little plain style. The major type of red pottery was jar with white coating and sculpted in light relief style from rim to edge, which is sophisticated and in regular format. Corded pattern can be found from belly and bottom on most potteries. In particular, white potteries were the signature style in this particular period, both in large amount and were decorated decently. Most of them are ringed-foot ware (including basin, gui vessel, bowl, cup and etc.) and pot ware (mostly folded-shoulder). Decoration styles involved incised, whorl, and stamped pattern. “Bird of paradise”, “Sun”, “Animal face” and other sophisticated patterns, which forms a wide range of main theme on these potteries. On the other hand, most stone tools were chipped stone tools. Polished stone tools include small adze and small amount of crystal diamond. Bone tools include conical tool and few decorated item such as bone slotted ring. Another unique feature of this site was that huge amount of animal remains were discovered. After initial assessed by Researcher Yuan Jiarong, it is known that the major hunting targets by the people during that period were mainly cow, pig, deer and bear.

Geographical location of the Qianjiaping site is important as it connected to the two major rivers system of Zhujiang River and Yangzi River. In this regard, more information can be retrieved from this excavation in studying the cultural exchange and spreading during Neolithic period to Shang dynasty within the two areas, especially the southward movement of the white pottery assemblage in Hunan from 6000 years ago.      (Translator: Li Langlin)