Marks on shells found in Qesem Cave suggest the hominins had established sequences of processing, including cracking open tortoises with stone hammers and cooking them in their shell.
Ruth Schuster
Source - http://www.haaretz.com/jewish/archaeology/1.700532 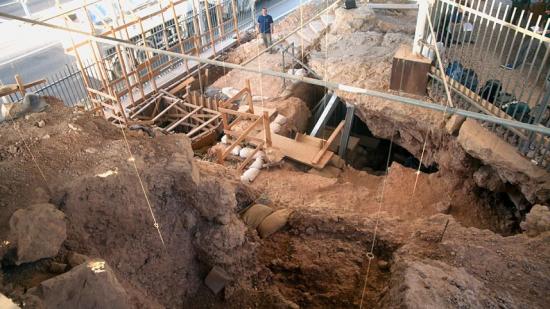 Excavating in Qesem Cave, a Lower Paleolithic site by Rosh HaAyin, where, it turns out, early men ate roasted tortoises.Qesem Cave expedition, Tel-Aviv University
Prehistoric men living in Qesem Cave, Israel nearly half a million years ago ate tortoises, say archaeologists based on shell and bone remains found in the site, which bore clear marks of man-caused damage and burning. It is the oldest-known example of cooked tortoise cuisine.
What ancient humans ate has always been of vast interest, and the answer seems to be largely, whatever they could get their hands on. Chemical analyses of Neanderthal remains from northern European climes indicated dietary rigidity and heavy reliance on meat. Recent evidence indicates that prehistoric men were responsible for the extinction of giant birds and other mega-fauna in Australia; other evidence indicates that the ancients did not cavil at eating micro-mammals.
That said, hunting isn't easy, leading to speculation that images of hairy proto-men gathered around a campfire feasting on mammoths are fantastical, and that Stone Age and earlier people ate mainly vegetable matter. Some evidence – also from Qesem, 400,000 years ago – shows clear evidence of meat-eating.
In fact it turns out that prehistoric hominids, going back a couple of million years, had a taste for tortoise. They're delicious, reportedly, and nutritious, their shells are useful, and they are as easy to catch as a potato. (As the scientists put it, hunting them is a low-risk, low-energy activity.) The discovery that cavemen living in Qesem cooked and ate tortoises some 400,000 to 300,000 years ago should therefore not surprise.
The remains found at Qesem (which is just outside Tel Aviv) indicate that ancient men were in the process of taming fire at the time (or may have already done so). Marks on the fossil remains of the shells suggest they had established sequences of processing the reptiles, including cracking them open with stone hammers and roasting them on coals in their shells.
By the way, tortoises live on land and turtles are chiefly aquatic, which is the main difference between them.
As for the people living at Qesem, going by teeth found in the cave, they had evolved beyond Homo erectus and had certain modern features, as well as Neanderthal traits, Prof. Ran Barkai of Tel Aviv University told Haaretz.
It is difficult to reach generalizations about prehistoric diets, for a vast number of reasons. It is clear though that like all animals, hominins would have had to adapt to their environments, fauna and flora and all: geography and climate were therefore key to nutrition. Humans at Qesem ate tortoises because they could.
Qesem tortoises 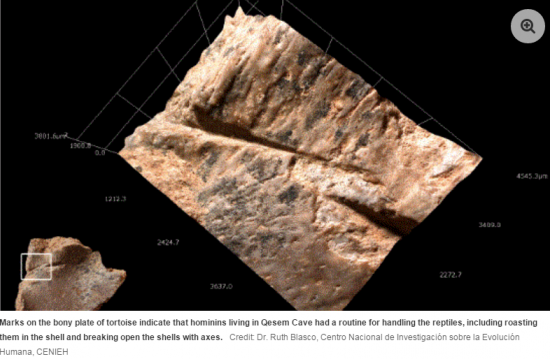 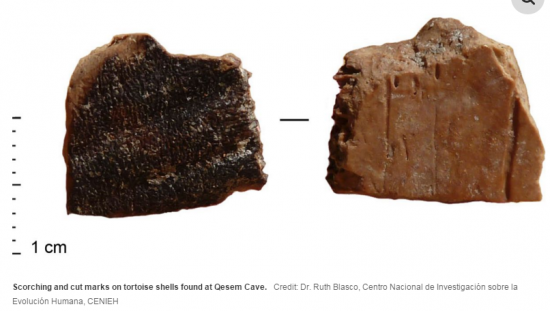 In fact a lot of ancient proto-men could. By and large the thinking is that Neanderthals were as said largely meat-oriented, while humans had a more abrasive, variegated diet.
Testudine bones with signs of processing have been found in sites in Africa and Eurasia dating back to the Early Pleistocene, starting about 2.5 million years ago. Remains at Turkana Basin in Kenya indicate that the hominins were using aquatic resources and ate turtles, too. In South Africa, copious discoveries of tortoise predation were found, including at the famous Blombos Cave, where some evidence indicates again that the animals were cooked in their shells. The same goes for the piles of tortoise remains found at Spain's Bolomor Cave over hundreds of thousands of years, but chiefly around 120,000 years ago.
Tortoise remains have also been found elsewhere in Israel, including at Hayonim Cave in the Galilee, which dates back 140,000-230,000 years, and at Kebara Cave  near Haifa, though that is relatively recent – a mere 48,000 to 60,000 years.
The tortoise consumption habit of the Qesemites suggests new possibilities regarding the division of labor in the cave, postulates Prof. Avi Gopher. Since in contrast to deer and aurochs, tortoises barely move, their capture might be considered "gathering" rather than "hunting", he says. In contemporary hunting-gathering societies, like the San, it is the young men who handle hunting large animals, gathering is more typically an activity for the old and children, he suggests. Maybe that is what happened at Qesem.
Whoever caught the things, the archaeologists don't believe the hominins of Qesem Cave dined chiefly on tortoise. They seem to have chiefly eaten deer and birds, wild asses, horses and aurochs. Remains of micromammals found in the cave, such as gerbils, could be due to other predators, such as owls. Probably the reptiles were supplementary to their usual diet, speculate Ruth Blasco and the rest of the international team from Tel Aviv University, the Senckenberg Research Institute and Natural History Museum, Germany, and Institut Catala de Paleoecologia Humana i Evolucio Social of Spain.
One last point. Eating tortoises may have been convenient but ultimately self-defeating. They grow very slowly. And indeed, in an unrelated study, researchers report discovering a plunge in the average size of the Mediterranean spur-thighed tortoise near the end of the Middle Palaeolithic era – which they blame on pressure from the population growth by hungry humans.