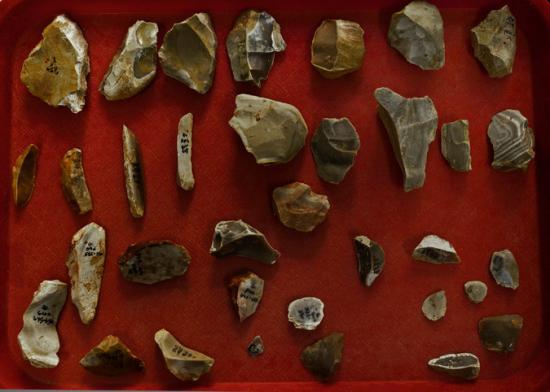 For years, archaeologists have been diligently digging their way through prehistoric layers of time, unearthing the secrets of Qesem Cave.

Located just outside Tel Aviv and discovered by accident during a road construction project in 2000, the cave most recently offered up insights into life hundreds of thousands of years ago that provide a sobering counterpoint to at least one aspect of modern life.

It seems that back in the day, early inhabitants of the area were all about recycling — a potential lesson for today’s Israel.

“Recycling was a way of life,” said Ran Barkai, an associate professor in the department of archaeology and ancient Near Eastern civilizations at Tel Aviv University who, together with Prof. Avi Gopher, his teacher, has researched Qesem Cave since its discovery. “It was part of human evolution and human nature.”

“At some point,” he added, “they taught us to forget that.”

After 14 years, archaeologists have penetrated about 32 feet below what was the original ceiling. Along the way, they found thousands of recycled tools in the cave, including bone hammers and reworked flint stones. With aged, glossy surfaces broken by newer, rougher razor edges, the flint tools were part of a vast collection of knives apparently used for butchering, cleaning animal hides and cutting vegetable matter. Some of the blades are as sharp as a scalpel and as small as a thumbnail. 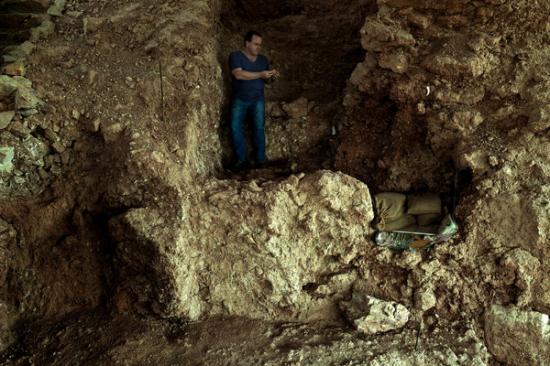 Prof. Ran Barkai has researched the Qesem Cave since its discovery in 2000. Flint stones that indicate prehistoric recycling were found in the cave and examined at Tel Aviv University.  Credit Rina Castelnuovo for The New York Times

Recycling came naturally to these early humans, a habit largely neglected in modern-day Israel, where a current television public awareness campaign features children in superhero outfits pilfering plastic bottles from under their parents’ noses for recycling.

Amir Peretz, the minister of environmental protection until last month, was about to push through draft legislation to phase out the use of plastic bags at Israeli supermarkets. But he resigned, citing his opposition to the 2015 draft state budget and the lack of peace negotiations with the Palestinians, and his initiative was shelved.

At the cave site, there is evidence that prehistoric humans were not always so thrifty, but that the behavior evolved. Life in the region dates back at least 1.5 million years, but Professor Barkai said that a dramatic change had occurred here 400,000 years ago. He said that for some unknown reason the elephants that had served as a main food source apparently disappeared, prompting a change of menu and lifestyle for the inhabitants of Qesem Cave, near the town of Rosh Haayin.

In the quest for survival, Israeli archaeologists say, the cave dwellers here began hunting fallow deer instead of elephants. At the same time, they discovered the delights of a hot, home-cooked meal — and apparently invented the barbecue.

These early humans had the intelligence to squeeze the maximum out of every product. After cooking the meat, then smashing the bones to extract the marrow, Professor Barkai said, “they used the bone fragments to create tools with which to butcher the next deer.”

“They closed a circle,” he said.

The cave is just 7.5 miles east from the bustling center of Tel Aviv, the fast moving metropolis on the Mediterranean. The cave was exposed by chance when road builders widening the highway to the West Bank settlement of Ariel blasted a hillside, collapsing the cave’s ceiling. Another archaeologist who happened to be nearby, guarding his own cave, spotted chunks of rock packed with bones and flint and immediately realized that the site was prehistoric.

The road was diverted to skirt the cave, but to this day, the primeval find is tested by the trucks hurtling by.

The cave now sits under a canopy a few footsteps up a path off the four-lane highway. Ladders and narrow planks connect the various levels of the site that have been exposed. There is no digging in the winter, and many of the discoveries have been removed and taken to laboratories or university storerooms. But flint and bone fragments remain lodged in every cranny of the cave’s beige earth.

The cave caused a bit of a stir in 2010, when it was reported that several teeth found there had provided evidence for the existence of Homo sapiens, or modern humans, 200,000 years earlier than in Africa, and earlier than in anywhere else in the world.

By now, 13 early human teeth have been found, and Professor Barkai said the inhabitants might have been a kind of missing link — more advanced than Homo erectus and precursors of Homo sapiens and the Neanderthals.

The latest research to emerge from the cave was the insight into recycling among the Stone Age innovators, who lived here on and off from about 400,000 to 200,000 years ago.

That phenomenon was recently documented in a series of articles that the Tel Aviv professors wrote with other experts for the Elsevier Quaternary International academic journal, with titles like “Recycling Bones in the Middle Pleistocene: Some Reflections From Gran Dolina TD10-1 (Spain), Bolomor Cave (Spain) and Qesem Cave (Israel),” and “The Function of Recycled Lithic Items at Late Lower Paleolithic Qesem Cave, Israel: An Overview of the Use-Wear Data.”

The early humans had to adapt to their changing environment — perhaps another lesson for the modern world. They developed an independent, local culture, Professor Barkai said, that stretched across the territory that now includes Jordan, Lebanon and Syria.

The hunters needed to become more discerning, agile and efficient. On average, 80 deer were needed to make up the food provided by one elephant. The cave dwellers also gathered small fruit and nuts and collected wood for fires. This area was a kind of Eden, with natural springs and flint in abundance.

They began crafting their sharp tools from flint, according to experts, racing ahead of their time and their human contemporaries in Europe and Africa.

“This was the high technology of the ancient man,” Professor Barkai said.

In a patch that once served as a hearth, layers of hardened ash date back 300,000 years. Here the earth is packed with bone fragments, including a horse’s jaw with two front teeth. Though sporadic use of fire existed much earlier, Qesem Cave has been established as the site with the earliest evidence of the systematic use of fire for roasting meat on a daily, domestic basis — “like when we turn on the gas stove,” as Professor Barkai put it. The cave dwellers’ ancestors probably ate their elephants raw.

The cave was organized like a house, he said, with different areas serving as a kitchen, a workshop and an area where children appeared to have practiced making flint tools of their own. The hearth also appears to have served as a kind of central campfire.

Professor Barkai said that evidence of some of the same behavior, technologies and methods had been found as far away as Syria and that there must have been some kind of communication between the early humans in the region.

“I don’t know how,” the professor says. “There was no Wi-Fi, but they knew each other.”