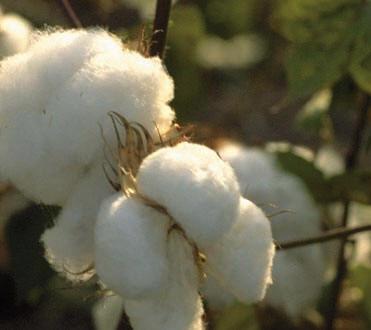 Scientists studying 1,600-year-old cotton from the banks of the Nile have found what they believe is the first evidence that punctuated evolution has occurred in a major crop group within the relatively short history of plant domestication.

The findings offer an insight into the dynamics of agriculture in the ancient world and could also help today's domestic crops face challenges such as climate change and water scarcity.

The researchers, led by Dr Robin Allaby from the School of Life Sciences at the University of Warwick, examined the remains of ancient cotton at Qasr Ibrim in Egypt's Upper Nile using high throughput sequencing technologies.

This is the first time such technology has been used on ancient plants and also the first time the technique has been applied to archaeological samples in such hot countries.

The site is located about 40 km from Abu Simbel and 70 km from the modern Sudanese border on the east bank of what is now Lake Nasser.

They also studied South American samples from sites in Peru and Brazil aged between 800 and nearly 4,000 years old.

The results showed that even over the relatively short timescale of a millennia and a half, the Egyptian cotton, identified as G. herbaceum, showed evidence of significant genomic reorganisation when the ancient and the modern variety were compared.

However closely-related G.Barbadense from the sites in South America showed genomic stability between the two samples, even though these were separated by more than 2,000 miles in distance and 3,000 years in time.

This divergent picture points towards punctuated evolution - long periods of evolutionary stability interspersed by bursts of rapid change – having occurred in the cotton family.

Dr Allaby said: "We think of evolution as a very slow process, but as we analyse more genome information we can see that there's been a huge amount of large-scale proactive change during recent history.

"Our results for the cotton from Egypt indicate that there has been the potential for more adaptive evolution going on in domesticated plant species than was appreciated up until now.

"Plants that are local to their particular area will develop genes which allow them to better tolerate the stresses they find in the environment around them.

"It's possible that cotton at the Qasr Ibrim site has adapted in response to extreme environmental stress, such as not enough water.

"This insight into how domesticated crops evolved when faced with environmental stress is of value for modern agriculture in the face of current challenges like climate change and water scarcity."

For archaeologists, the results also shed light on agricultural development in the ancient world.

There has long been uncertainty as to whether ancient Egyptians had imported domesticated cotton from the Indian subcontinent, as had happened with other crops, or whether they were growing a native African variety which had been domesticated locally.

The study's findings that the Qasr Ibrim seeds were of the G. herbaceumvariety, native to Africa, rather than G. arboreum, which is native to the Indian subcontinent, represents the first molecular-based identification of archaeobotanical cotton to a species level.

"The presence of cotton textiles on Egyptian and Nubian sites has been well documented but there has always been uncertainty among archaeologists as to the origin of these.

"It's not possible to identify some cotton varieties just by looking at them, so we were asked to delve into the DNA.

"We identified the African variety – G. herbaceum, which suggest that domesticated cotton was not a cultural import – it was a technology that had grown up independently."

The study Archaeogenomic evidence of punctuated genome evolution in Gossypium, which was funded by NERC, is published in the journal Molecular Biology and Evolution.