What would eventually become the successful excavation of the tomb began on the team's very first day of its field work in May 2015, conducted in a previously unexplored field near the Palace of Nestor. They immediately found one of the four walls of the warrior's grave.

"We put a trench in this one spot because three stones were visible on the surface," says Davis, adding, "At first, we expected to find the remains of a house. We expected that this was the corner of a room of a house, but quickly realized that it was the tops of the walls of a stone-lined grave shaft."

In the end, the shaft measured about 5 feet deep, 4 feet wide and 8 feet long. It took the team about two weeks to clear the shaft before "we hit bronze," says Stocker. At that point, they realized they might have an exceptional prize: an undisturbed grave shaft, never stripped by looters. She explains, "The fact that we had not encountered any objects for almost a meter indicated that whatever was at the bottom had been sealed for a long time." 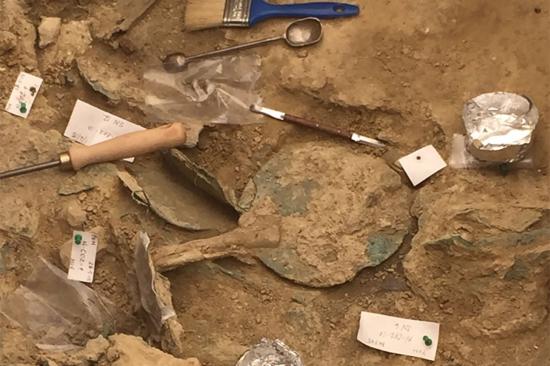 A bronze mirror with an ivory handle.

Stocker and Alison Fields, a UC graduate student of classics, did most of the actual excavation because their smaller size allowed them to work more easily and carefully around the tomb and its many precious objects. 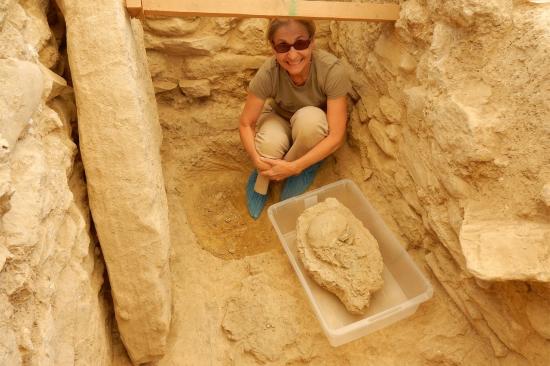 UC's Sharon Stocker with the 3,500 year-old skull found in the warrior's tomb.

Both Stocker and Davis say it was good luck to discover this intact grave. Given the rarity of the find, it's unlikely to be repeated. "It's almost as if the occupant wants his story to be told," Davis says.

And that story will continue to unfold. The UC team and others are studying the artifacts in detail, with all artifacts remaining in Greece and their final disposition determined by the Greek Archaeological Service. Former UC anthropologist Lynne Schepartz, now of the University of Witwatersrand in Johannesburg, South Africa, will study the skeletal remains. 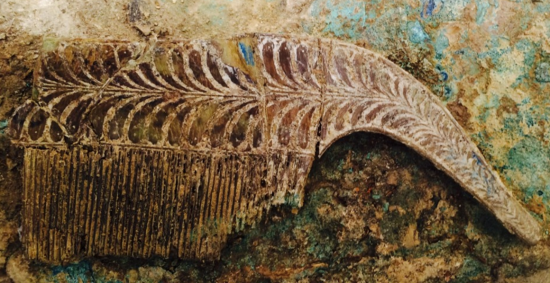 One of six ivory combs found within the warrior's tomb.

This unique necklace measures more than 30-inches long and features two gold pendants decorated with ivy leaves. It was found near the neck of the warrior's skeleton.

CATALOGUE OF OBJECTS FOUND WITHIN THE WARRIOR TOMB