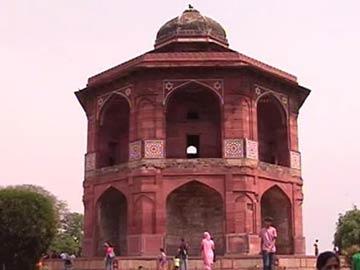 On World Heritage Day, the Archaeological Survey of India opened its excavation site at the Purana Qila in the capital to the public, allowing visitors to take in the city's history, dating back all the way to the 3rd century BC or even earlier.

This is the first time that an excavation site and its findings will be open to public while the project is still going on.

Opened after a span of 40 years, the Archaeological Survey of India has carried out an excavation here since February this year -- to identify the presence of Painted Grey Ware which if found, would establish the site's link to Indraprastha, the legendary capital of the Pandavas in the Mahabharata, and therefore link it to other sites of the Mahabharata.

Vasant Swarnakar, ASI's Delhi circle chief, said that "in earlier excavations, Painted Grey Ware was not found. It has been archaeologically proven that if it is a Mahabharata site then Painted Grey Ware should be found; we have started with the hope of finding this ware".

The 14 trenches at the excavation site have remains of at least 8 dynasties -- the Mauryan, Gupta, later Gupta, Sultanate, Rajput, Kushan, Mughal as well as, hopefully, the Indraprastha era.

The project  has so far discovered a rare 12th century sculpture of Vishnu, terracotta seals from the Gupta period, pottery from the Kushan and Gupta periods, structures from the Rajput and Kushan periods, copper coins, terracotta human figurines, charred wheat and rice grains and many more remains from the Mauryan period.

Recently, a Ganesh figurine from the Mughal period and a Gajalakshmi tablet from the Gupta period were also discovered by the ASI.

Miniature pots, semi-precious stones, beads, block-printing stamps and pieces of glass bangles were also on display inside glass showcases at the exhibition on Friday.

The ASI will eventually turn this site into an open museum, which will be covered with glass, and people will actually be able to walk over it.

The ASI has been pushing a proposal to open excavation sites permanently to visitors for some time now.

This is the first time that an excavation site has been opened to the public while work is still going on. The ASI also hopes that it will also be able to convince the government to declare Delhi a World Heritage City.