Epic winter swells just off of Oahu, Hawaii, have churned up monster waves more than 7 meters high, sent seawater surging around the foundations of beachfront homes, and gnawed away at sandy cliffs along the island’s North Shore.

They’ve also exposed rare petroglyphs that have not been seen in years.

The unusually strong seasonal surf has washed away layers of sand all along Pupukea Beach, just east of the big-surf mecca of Waimea, to reveal dozens of large glyphs carved into the bench of lava rock.

More than 70 carvings have been exposed, mostly depicting human-like figures and dogs, according to the Historic Hawaii Foundation, whose workers are documenting the images. 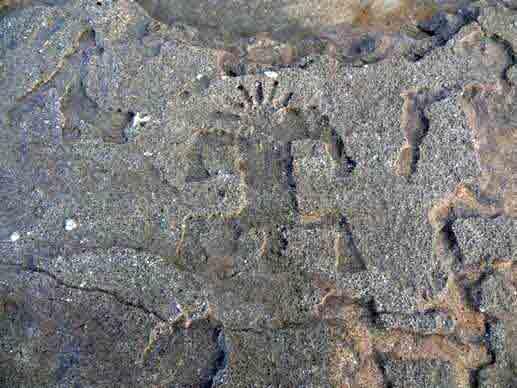 Strong winter swells have washed away the sand from the lava rock along Oahu’s North Shore, exposing petroglyphs of dogs and human-like figures (Photo by Donna Ching/Historic Hawaii Foundation)

A public safety officer reported the find to the foundation in late January, but social media have been rife with reports by surfers, beachcombers, and rock-art enthusiasts who have been sharing pictures of the glyphs since shortly after the new year when the swell started.

By most accounts, the North Shore petroglyphs were last seen in 2010, when similar winter weather exposed some of them. Before that, they had not been observed since 2004.

The appearance of the markings seems to coincide with El Niño, the periodic climate anomaly that causes unusually warm waters in the equatorial Pacific, and huge surf off of Oahu.

A weaker version of this cycle occurred in 2004, while 2010′s was particularly strong, as this year’s is shaping up to be.

Because they’re seen so rarely, the petroglyphs do not seem to have been the subject of very thorough study; they were reportedly first documented by archaeologists in 1970, and new ones have been identified as recently as 1983. 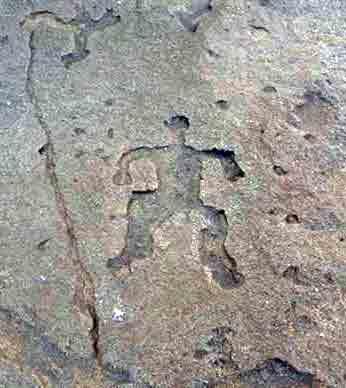 The field of petroglyphs revealed on Oahu contains at least 70 images. (Photo by Donna Ching/Historic Hawaii Foundation) But previous research into Hawaiian petroglyphs, known locally as kii pohaku, has suggested that such carvings were used to document travels around and among the islands, to commemorate important events, and to mark trails and boundaries.

At Pu’u Loa, a vast field of more than 23,000 petroglyphs on Hawaii’s Big Island, many of the motifs are notable for featuring holes in which Native Hawaiians deposited the umbilical cords of newborn babies.

Back on O’ahu, depictions of dogs are particularly prevalent.

In addition to those newly exposed on the North Shore, canines appear often at the Nu’uanu rock art site near Honolulu, where they have been said to depict a wicked, cannibalistic dog-like beast known as Kaupe.