The excavation site is located on the hillside 500 meters south of Jiangtun village in the northwest of Pulandian, Dalian city, where Han tombs has been found early in 1970s. Archaeologists from Liaoning Provincial Institute of Archaeology and Cultural Relics have conducted investigation and excavation in March 2010, and the work is now over. A total of 207 tombs containing 2000 articles or so were found.
According to their forms, these tombs fall into two types: pit tombs and brick-chambered tombs.
There are 94 pit tombs, which mostly are juxtaposed tombs, that is, the two tombs were arranged side-by-side, or partial overlapped with each other. There are small numbers of single burials and joint burials. In the light of their fillings, the tombs could be categorized into five types: I, tombs filled with earth; II, tombs filled with shells; III, tombs filled with piled tile pieces; IV, tombs with paved tiles on the bottom and filled with shells; and V, tombs filled with mixture of stones and shells. Among them tombs of Type II occupy the largest number. 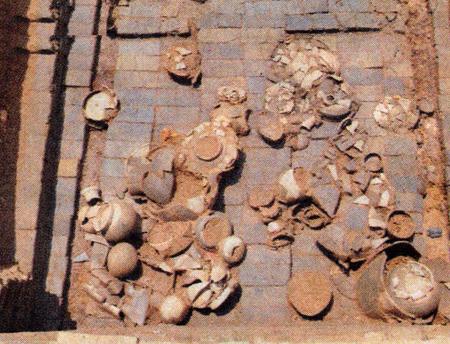 The burial objects are mainly ceramics, and also contain some bronzes, irons, bones and jades. Ceramics are pots, jars and Ding tripods. Bronzes include mirrors, basins, belt hooks, gilt chariots and horses, gilt bronze petal-shaped ornaments, and coins. Irons are ring-handled knifes and swords. Jades are pendant, Huang pendants and sword ornaments.
The brick-chambered tombs totaled 113, including three types: single-chambered tombs, two-chambered tomb and multi-chambered tombs. Many of them were serious looted and destroyed.
The single-chambered tomb is in a small size, consisting of a passage, an entrance and a chamber. The passage is sloping, leading to the arched tomb entrance. All tomb roofs were destroyed and their forms are thus unclear. This type of tombs was mainly built with undecorated bricks with exception of only one tomb with patterned bricks. The skeletons in tombs are rotted. Burial objects include ceramics, bronzes, irons, colored glazes and ambers. Ceramic are jars, urns, granary models, well models, kitchen models, toilet cases, lamps and figurines. Bronzes are mirrors, belt hooks and coins. Irons are swords and nails. Colored glaze wares are ear fillers. 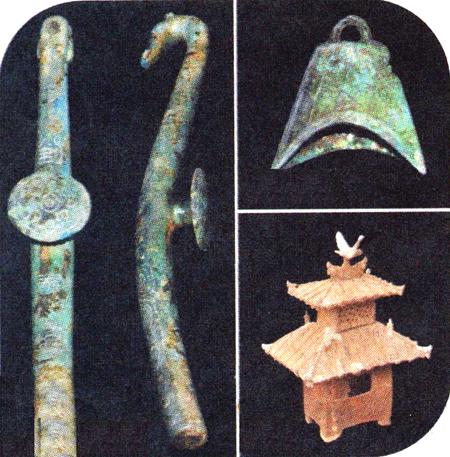 The two-chambered tombs are in larger size, consisting of a passage, an entrance and two chambers. The passage is sloping, leading to the arched tomb entrance. There is an aisle between two chambers. The bricks are mainly undecorated, and only some of them bear designs. Most tombs have a smaller chamber in front of the other. Only one tomb has the two chambers built abreast of one another, and the left chamber with a passage is larger in size than the right one. The skeletons are seriously rotted. Burial objects include ceramics, bronzes and colored glazes. Ceramics are jars, plates, urns and models of granary, well and kitchen. Bronzes are mirrors and coins, and colored glazes are ear fillers. In additional, there is a deer skeleton without the head contained in the front chamber of Tomb M26.
Most of multi-chambered tombs have three chambers, which consist of a passage, an entrance and three chambers. The three chambers are mainly arranged in a row, or in the form of a chamber in front of two side-by-side chambers. Only one tomb has two passages and four chambers, with the two passages at the south leading to the same front chamber, which is followed by two separated middle chambers and a back chamber. Most skeletons are rotted away, and fragments of ceramics, bronze mirrors and coins have been found.
The analysis of tomb forms and burial objects points to the period between the middle of Western Han to the middle or late period of Eastern Han. The excavation not only provides new materials for studying Han tombs in southern Liaoning province, but also finds an important hue for the research on Zhangdian Han City-site on the south of these tombs.    (Translator: Tong Tao)