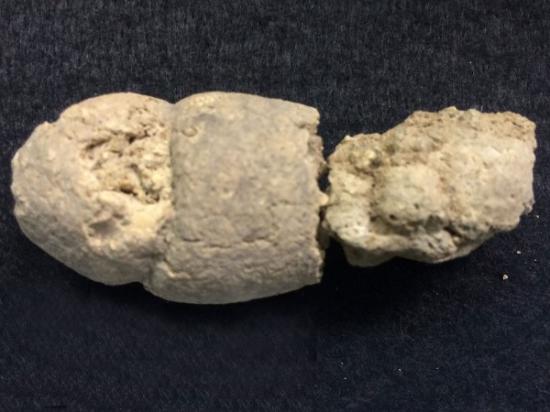 On Vieques Island off the coast of Puerto Rico, two ancient South American tribes coexisted for more than 1000 years, from 5 to 1170 C.E. The Saladoids were known for their white and red painted pottery, as well as their openness to learning from other cultures. The Huecoids, in contrast, were mysterious craftsmen who skillfully carved semiprecious stones and kept to themselves. For the past 20 years, archaeologists have debated whether the two tribes belonged to the same culture or distinct cultures with origins in present-day Venezuela and Bolivia, respectively. So researchers resorted to coprolites—fossilized feces excavated from the tribes’ settlements. The ancient dung, shown in the above picture, contains gut microbes that provide clues to the two populations’ diets. After extracting and analyzing DNA at the core of the coprolites, which haven’t been contaminated by microbes in the soil, the researchers found that although both tribes consumed seafood, only the Saladoid samples contained freshwater fish parasites, suggesting that the tribe consumed raw fish regularly. The Huecoids, on the other hand, showed a preference for maize and fungi. The tribes’ distinct diets suggest that they indeed belonged to different cultures, the researchers report this month in PLOS ONE.