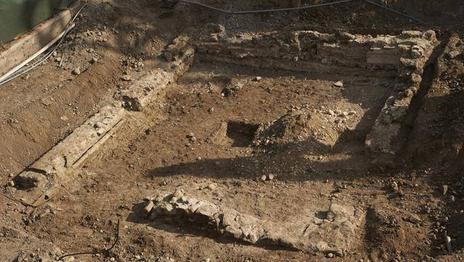 A caretaker's cottage was located on the Provo Tabernacle block.  2012 by Intellectual Reserve, Inc.

First came the backhoes in mid-October, scraping off asphalt and modern layers of dirt. Then came the smaller tools — picks and shovels.

Finally, when they neared the remains of the first LDS baptistry in Utah County, built around 1875, archeologists brought in trowels and brushes to carefully remove the last bits of dirt. When the dust surrounding the site had cleared, Rich Talbot, director of BYU’s Office of Public Archeology, looked on with a “profound sense of awe.”

“The font was a sacred location for so many people,” Talbot said. “There’s a significant connection between the (Mormon pioneers) who built it and were baptized there and their descendents who may still live in Utah County or even those outside of Utah County.”

A circa 1885 photo of the Provo Tabernacle, which burned in 2010, and where the new Provo City Center Temple is being constructed. Also pictured are the original meetinghouse and the baptistry. (2012 by Intellectual Reserve, Inc.)

The excavation took place over the course of three weeks on the site of the old Provo Tabernacle, where work is underway to use the tabernacle's old walls in the construction of the new Provo City Center Temple of The Church of Jesus Christ of Latter-day Saints.

The excavation revealed a remarkably intact picture of one of the earliest baptistries built in Utah. In fact, the Provo baptistry, which was constructed in the 1870s, was the first outside Salt Lake City with the exception of one in St. George.

"To find anything intact is always a surprise," he said, "because there’s always that great danger that there’s nothing left, that everything’s been destroyed.”

Talbot and his team, which included a dozen BYU students, found not only the baptistry walls, but also the lower walls of the 5-by-9-foot font as well as pipes and the foundation of what they think was a stove used to heat the water. The baptistry provided privacy and a more comfortable, year-round setting for baptisms to take place, according to Talbot. 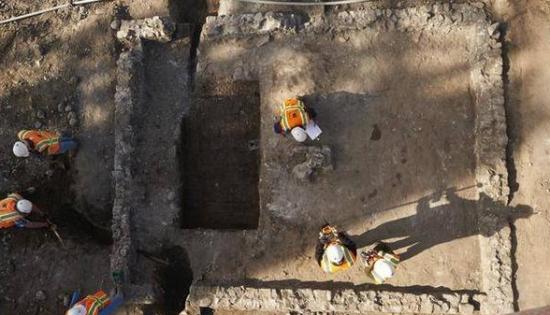 Also discovered were fragments of earth-brown and sky-blue plaster. “From the remains we found we could tell that they put a lot of care into this,” Talbot said. “They wanted to make it a very special building for the baptisms that would take place.”

The small building was located near a meetinghouse built around 1860 and the old Provo Tabernacle, which was built in the 1880s. The baptistry's remains were found just to the northwest of where the temple will stand. Church leaders expect the temple to be completed in 2015.

“What we’re seeing here is the fulfilling of the circle,” Talbot said. “The meetinghouse and the baptistry were places people could make covenants and promises. The modern temple will be a place where promises are also made and where baptisms occur. That kind of completes the circle of the hallowedness of the temple block.”