Archaeologists on the trail of a little-known ancient culture have found a cache of clues that may help unlock its secrets: a cave containing hundreds of children’s moccasins.

The cave, on the shore of Utah’s Great Salt Lake, was first excavated in the 1930s, but the artifacts found there — and the questions that they raised — were largely forgotten until recently.

Dr. Jack Ives of the University of Alberta and his colleagues resumed excavations in the cave in 2011 to better understand its occupants, some of whom Ives believes may have been part of one of the greatest human migrations in the continent’s history.

The view from Promontory Cave 1 in Utah, where excavations in the 1930s and again in the 2010s turned up “exceedingly abundant” deposits of artifacts. (Courtesy Dr. Jack Ives)

The site — part of a complex of natural shelters known as the Promontory Caves — contains “exceedingly abundant” artifacts numbering in the thousands, Ives said, marking a human occupation that began rather suddenly about 850 years ago.

This wealth of artifacts may go a long way in demystifying the distinctive, little-researched populations often referred to as the Promontory Culture.

“The beauty of the Promontory Culture is, probably 99 percent of the material culture that the people used was perishable,” Ives said in an interview.

“So, normally in the archaeological record, we only see the durable items — the pottery, the stone tools, the animal bones.

“[But] we have, with the Promontory Culture, spectacularly, more material culture, so we can see all aspects of daily life, together with nuances likely to reflect different cultural identities.”

Large piles of butchered bison and elk bones, for example, suggest that the Promontory lifestyle was based, almost exclusively and quite successfully, on big-game hunting, while other groups around them were farming and foraging.

Scant ceramic sherds and basket fragments, meanwhile, bear strong signs of influence from other Great Basin cultures, including the Fremont.

But it was the staggering amount of footwear in the caves that captured the attention of archaeologists, past and present.

With soles made from a single piece of bison leather, lined with fur, and sewn together at the heel, the moccasins are made in a style typical of the Canadian Subarctic, Ives said, a fashion his team describes as being “decidedly out of place in the eastern Great Basin.”

These moccasins and other cues have led some experts to theorize that the caves’ inhabitants were part of a great migration from the far north, a wave of people who moved into the Great Basin in the 12th and 13th centuries, and eventually gave rise to cultures that include the Apache and the Navajo.

To better understand the role that the Promontory may have played in this event, Ives and his colleagues used the moccasins to gauge the size and makeup of their population.

The team studied 207 pieces of footwear excavated from the cave, both in the 1930s and the 2010s, using the moccasins’ lengths to estimate the age and stature of their owners, based on known anatomical ratios.

The results showed that the vast majority of the moccasins — just over 82 percent — were worn by children of ages 12 and under. 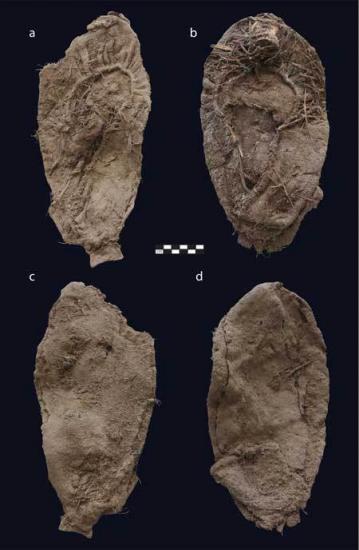 “One of our [paper’s] reviewers said, this isn’t like a normal family ratio — this is more like an elementary school ratio,” Ives said in an interview.

Because the moccasins were likely “cast offs” that accumulated over several decades, these figures don’t reflect the exact demographics of the Promontory community, Ives explained, but they do provide valuable insights into its general proportions.

“These numerous moccasins are telling us about the structure of the population, not necessarily specific numbers,” he said.

“But you can see that children and subadults are a very big part of the population.”

Analysis of radiocarbon dates from the samples suggests that the most intense period of the cave’s use ranged over only one or two human generations — from about 1250 to 1290 CE.

This was a time, Ives points out, when other cultures in North America’s interior were undergoing dramatic changes, as a drying climate and shifting social landscapes forced entire communities to relocate, most notably among the Ancestral Puebloans.

“It’s a tumultuous time period in which this is happening,” he said.

“We know there’s a significant environmental change going on.”

And yet, the large number of children in the Promontory population — along with other clues like the abundance of burned bones of large game — suggest that the Promontory people were “thriving,” Ives said.

“That very high proportion of kids would suggest that it’s a population that’s reproducing very well,” he said.

“We can’t get more specific than that, … but it’s suggesting that there are a lot [of children] in the society, and that implies minimally that they’re doing pretty well.

“Taking it a bit farther, they’re likely a growing population.” 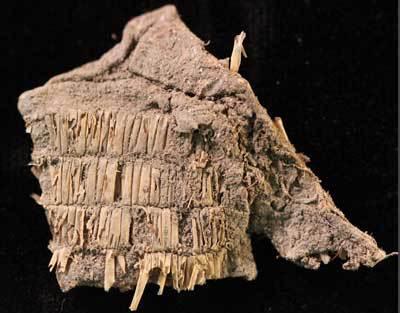 A fragment of elaborate quill work recovered in May 2014, from the decorated vamp, or upper, of a moccasin. (Courtesy Jack Ives)

This period of flourishing amid otherwise hard times may have been a pivotal chapter in what Ives calls the “immense human story” of migration from the Canadian Subarctic, one that resulted in the culturally diverse Southwest that we know today.

Ives and his colleagues plan to conduct more research on other artifacts from the caves, like stone tools, nets, and bows, that bear important similarities to Subarctic cultures.

But for now, the materials found in Promontory Caves stand as rare examples of perishable goods that have survived to provide glimpses into the day-to-day life during this crucial period.

“This is not mortality data,” he added. “Some research reaches conclusions from cemetery or burial settings.

“This is vitality data — these were living children and adults that the moccasins came from.”

Ives and his colleagues report their findings in the American Journal of Physical Anthropology.